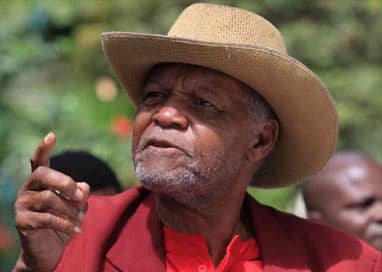 Joe Kadenge was a Kenyan football player and coach. Farayi Mungazi, writing for the BBC, has said that he is regarded as the finest footballer ever produced by Kenya.

He has been referred to as the finest footballer ever produced by Kenya by Farayi Mungazi, writing for the BBC

He started his professional career in the Nakuru Allstars and played for Harambee Stars for 14 remarkable years. In the 60s he played for Maragoli United where he held the record for the fastest ever goal scored in the Kenyan Premier League.

He also had a stint at Abuluhya United (now AFC Leopards) helping the club win the Kenyan Premier League in 1966.

Joe Kadenge was appointed the manager of Kenya National Football team in 2002 and was later succeeded by Jacob Mulee in 2003.

He was invited by Fifa to represent East and Central Africa in gracing the opening ceremony of the World Cup finals in South Africa in 2010.

In 2012, he was appointed the First Kenya Football Ambassador by the Football Kenya Federation (FKF).

Joe Kadenge had a daughter by the name Evelyn Wanjiku Kadenge Hoskin who passed early this year on 9th, 2019 in Aurora, Colorado, US. She is alleged to have succumbed to a stroke.

Joe Kadenge considered Kenya’s greatest footballer of all time passed on at the Meridian hospital in Nairobi, according to a statement from his son Oscar, on Sunday, July 7th, 2019.

His body is set to be transferred to Lee Funeral Home on Sunday afternoon. He was 84. 13 years ago, in January 2006, he was reported to have suffered a stroke.

LEGENDARY FOOTBALLER Joe Kadenge has died at a Nairobi hospital at 84, his son Oscar confirms. pic.twitter.com/HQwuyqHyWN