Home › Who is Joe Tait? Wiki, Biography, Age, Wife, Children, Cause of Death, Net Worth 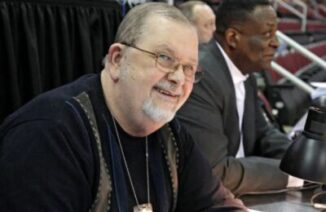 Joseph Tait was an American sportscaster who was a play-by-play announcer on radio for the Cleveland Cavaliers of the National Basketball Association (NBA) and on both television and radio for the Cleveland Indians of Major League Baseball. With the exception of two seasons in the early 1980s and an illness during his final season, he was the radio host for the Cavaliers from the team’s inception in 1970 through the 2010-11 season. He won the 2010 Curt Gowdy Media Award from the Basketball Hall of Fame.

After the army, Tait rebounded and spent time in Decatur, Illinois. From 1966 to 1968 he was the official voice of the Ohio Bobcats, served as WOUB’s athletic director, and taught sports broadcasts at the Athens institution. He then served as the voice of the Indiana University football network and was the pre-game host of the Indiana Pacers in 1969, as well as being the station manager and morning presenter on WBOW (1230 AM ) in Terre Haute, Indiana.

In 1970, Tait began his long-standing association with the Cleveland Cavaliers, who were in their first year of existence. The games were broadcast on WERE for the first two years. After then-owner Nick Mileti, who also owned the Cleveland Indians, bought Cleveland’s most powerful radio station WWWE (now WTAM) in 1972, he moved the radio broadcasts of both teams to WWWE. Tait was the radio host for the Indians from 1973 to 1979 along with Herb Score, and his television host with a variety of partners from 1980 to 1987.

Tait married his first wife in 1963. They were married for 18 years and had three children, Christina, Karen, and Joe. In 1983, he married his second wife, Jean. He and Jean resided in Lafayette Township, Medina County, Ohio.

Joe Tait, who was a part of Cleveland sports for more than four decades, died aged 83 at his Ohio home. His daughter confirmed the death, which was attributed to numerous health problems.

The Cavaliers organization issued the following statement regarding Tait’s death:

“The Cleveland Cavaliers mourn the passing of one of our beloved founding fathers and the original voice of the franchise for a long time: Joe Tait.

From the team’s inception in 1970 through the next four decades, the Basketball Hall of Famer informed, entertained, and inspired generations of Cavs fans, painting a picture of the game with an unrivaled blend of passion, precision, and humor.

“A dedicated husband and father, generous with his talent and spirit, Joe received every major sports broadcasting award that exists throughout his Northeast Ohio career. And like some of the more legendary Cavaliers he recounted, Joe joined them with his own banner hanging from the rafters of the Rocket Mortgage FieldHouse.

“A friend and mentor to many over the years, Joe Tait was not just a member of the Cavaliers family; he was a part of Cavs history like no one else and his voice and his unique and sincere perspective resonate throughout the team’s history. We will miss him very much.

“Joe was also famous for his dry wit and pragmatic outlook on life and he probably wouldn’t have wanted a big sentimental send-off. So, to paraphrase the legend, himself: let’s not say: “goodbye.” Let’s just say, “Have a GOOD night everyone!”

On Twitter, the Indians posted images of Tait calling the end of Barker’s jewel. They thanked him for “the decades of joy they have brought Cleveland sports fans.”