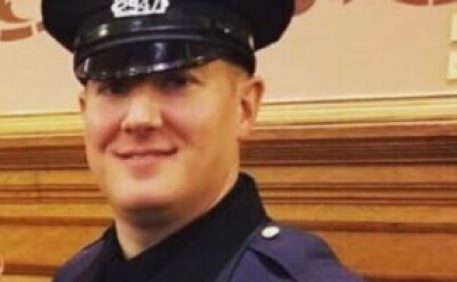 Joseph Seals was a Jersey City Police detective, who died Tuesday during a bloody shootout that began in a cemetery and was torn down in the city’s Greenville section, killing six people and injuring several others. Seals joined the City Police in 2006. He was promoted as a detective in November 2017 and belonged to the department’s Cease-Fire unit.

He was married and have 5 children.

At a Tuesday evening news conference, Jersey City Police Commissioner Michael Kelly said that Joseph was on duty when he was gunned down at the Bay View Cemetery. But they could not know the details why Seals was there.

“I just know he came upon bad guys and I’m not sure how he got there just yet,” Kelly said, adding later that police “have no inkling what the motive is.”

Calls to the seals’ family did not return Tuesday evening. Several marked police cruisers were parked outside the family home, and officers cordoned off the area around the house.

But visiting family friends remembered Seals as a great dad who was always there for his kids. “He was a smart, great man – couldn’t be better and better,” said a man who refused to give his name when he brought flowers to the house. “it’s a shame.”

The gunfight that claimed Seals’ life exploded onto the city’s rain-soaked streets at about 12:30 p.m., when either one or two gunmen shot the detective in the cemetery. When the city police responded to calls of gunfire near Martin Luther King Jr. Boulevard, they were met with fire from the gunmen’s high-powered rifles, authorities say.

Police closed the streets around a kosher grocery store in which the suspects barricaded themselves, authorities said. Backup from surrounding counties and the Port Authority Police arrived, as did agents from the FBI and ATF.

The gunmen continued pouring fire onto police for several hours, Kelly said. They hit two officers, Ray Sanchez and Mariela Fernandez, in the shoulder and the body, Kelly said. Both have since been released from the hospital.

By the end of the day, five lay dead in the supermarket: three civilians and the two suspected gunmen, Kelly said. No civilians were hit outside the store. Seals were pronounced dead at the hospital.

It began at roughly 12:30 p.m. at the Bay View cemetery at Garfield Avenue. The suspects were spotted at the cemetery in a stolen rental van. A police officer was among six killed in a lengthy gun battle in Jersey City on Tuesday 10 December 2019. The two suspects were also killed, along with three civilians. Their bodies were found in a kosher grocery store at Bayview Avenue and Martin Luther King Boulevard after an intense, hours-long shootout with police. Jersey City Police Chief Michael Kelly said police believe the three civilians killed in the grocery store were shot by the suspects.