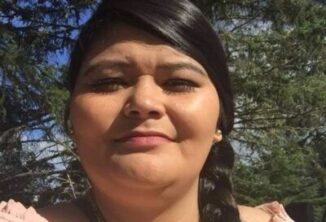 Joyce Echaquan was an indigenous Canadian woman, who films as cruel hospital staff taunt and calls her ‘stupid as hell’ before dying in agony. She passed away on Monday after she was admitted to an emergency clinic in the city of Joliette in Quebec for stomach torment on Saturday.

Echaquan was from the Atikamekw community of Manawan, about 250 kilometers north of Montreal. She was an Atikamekw woman who was the mother of seven, died at a Joliette hospital on Tuesday. Courtesy of Karine Echaquan

Joyce Echaquan has died at the age of 37.

The family of an Indigenous lady in Canada who kicked the bucket in emergency clinic this week after staff offered bigot remarks against her issuing the medical clinic, saying Joyce Echaquan’s demise is the consequence of fundamental bigotry.

Her Husband Carol Dubé disclosed to CBC he doesn’t have the foggiest idea why clinic workers were debasing his significant other with what’s been condemned as bigot designations.

“I have seven kids who end up without a mother,” he said. “I am miserable. I am so pitiful.”

My partner lived her final days in agony, surrounded by contemptuous people. The last words she heard before she died, from those who were supposed to protect her… Insults, humiliation

The Local Ladies’ Relationship of Canada said in an announcement: “Joyce Echaquan went to the clinic for clinical assistance.

“Rather, she was told she’s moronic, just useful for sex and she would be in an ideal situation dead as she argued for help before biting the dust.”

Joyce Echaquan went to the hospital for medical help. Instead, she was told she’s stupid, only good for sex and she would be better off dead as she pleaded for help before dying. This racism in the health care system is deeply disturbing and unacceptable.https://t.co/Coi3SYrI0U

Joyce Echaquan died in a Joliette, Que., hospital on Monday, her last moments captured by her cellphone camera as she broadcast the way health-care workers hurled insults at her.

At a news conference on Friday afternoon, Echaquan’s partner Carol Dube said the 37-year-old died because Indigenous people are discriminated against in the Canadian province of Quebec where she lived, including in the healthcare sector.

Echaquan, a mother of seven from Atikamekw of Manawan, a First Nation community in Quebec, died on Monday after seeking treatment for stomach pain at a hospital in Joliette, about 75 kilometers (46 miles) north of Montreal.

“I don’t want her death to be in vain. How many human lives will we need to lose before we can recognize that systemic racism exists against us as Indigenous peoples?” said Dube, who repeatedly broke down in tears as he spoke to reporters.

“I am convinced that my partner died because systemic racism contaminated Joliette hospital and killed my partner.”

Echaquan posted a Livestream on Facebook from the hospital on Monday night, which showed her moaning in pain and calling for help.

Hospital staff can be heard calling her a “f***ing idiot” and saying she is only good for sex. “You’ve made bad choices, my dear. What would your children think, to see you like this?” said one of the staff members.

Dube said Friday that his partner “lived her final days in agony, surrounded by contemptuous people”.

“The last words she heard before she died, from those who were supposed to protect her,” he said in French, his voice breaking. “Insults, humiliation … She died in indignity when she needed to have her entire family around her until the end.”

A nurse and a nursing support staff member involved in the incident have been fired, local media reported this week, and the local health agency and coroner’s office are launching investigations into what happened.

Jean-Francois Bertrand, the legal counselor speaking to the family, on Friday said they are using the emergency clinic where Echaquan passed on, just as all medical clinic staff individuals included or complicit in her demise, for harms.

The family is additionally recording a grumbling with a common basic liberties commission and making a case with a commonplace body (IVAC) that explores and offers pay to casualties of criminal acts, Bertrand said.

He added they additionally plan to seek after an attendant engaged with Echaquan’s demise to be deprived of her permit and to document a solicitation with police requesting they explore other criminal accusations that can be recorded for the situation.