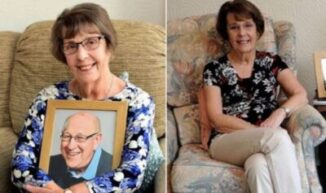 June Bernicoff was the cast member on the Channel 4 series Gogglebox. She appeared on the hit series with her husband Leon, who died in 2017. This is a series in which members of the public commentate on television programs from their living rooms. Bernicoff was also an author.

Bernicoff was married to Leon, her husband for 57 years before he died in 2017. Bernicoff and Leon appeared on the show together from 2013 to 2017. She has 2 daughters: Helen and Julie.

The couple met in 1955 at a teacher training college and were married for 57 years, raising their family in Liverpool. Tweeting in December, Bernicoff said she was “reluctantly leaving” Liverpool after 62 years, to move closer to family.

Bernicoff was a well-known author who wrote mostly about her life with her husband Leon. She wrote about 4 books about their lives. Some of her work included: Leon and June: A Lifetime of Love and Laughter,2018, Forever Sweethearts: Sixty Years of Love, Life & Laughter in Liverpool 2018, Leon and June: Life, Love, and Laughter: Our Story 2019, Leon and June which was expected on May 12, 2020.

Bernicoff also appeared on the hit Channel 4 series Gogglebox, alongside her husband Leon who died in December 2017, at 83. This made June leave the show following the news of her husband’s demise.

Alexander added that Bernicoff’s death was not connected to Covid-19 and that she had been treated at a hospice. Following Leon’s death, Bernicoff wrote two books about the couple’s life, Forever Sweethearts, and Leon and June: Our Story, and continued to make media appearances, though she did not return to Gogglebox. Speaking to Graham Norton on BBC Radio 2 last year, she said Leon had insisted on filming their final episode together despite his illness.