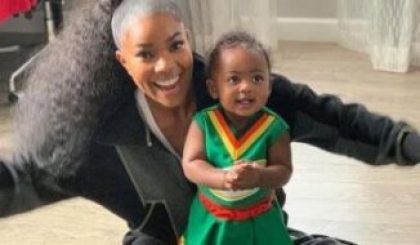 Kaavia James Union Wade is the daughter of American actress Gabrielle Union. She was born in 2018 via a surrogate due to her struggles with miscarriages.

Gabrielle Union shares adorable photos of her daughter, dressed as a cheerleader paying homage to her beloved hit, “Bring it On!”

the actress captioned the post on Friday, explaining that Nebraska sandwich shop, Runza gifted her the little uniform.

Union, 46, is originally from Omaha, Nebraska, and is in her home state for the University of Nebraska’s football game against Ohio State on Saturday.

On Friday, she also posted fun footage on her Instagram stories of a family party along with husband, Dwyane Wade.

The actress’ Instagram followers — celebrity and not — couldn’t get enough of her 10-month-old baby dressed like a Compton Clover from the 2000 hit.

“I love this,” Shonda Rimes commented, while fellow Nebraska native, Ashley Graham, gushed over their love for the local eatery.