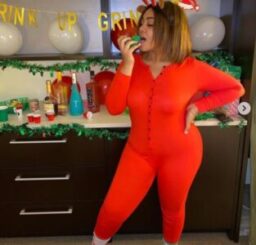 According to authorities, she was not kidnapped or missing in Jamaica.

Collier recently visited Jamaica and convinced hundreds of thousands of social media users, including celebrities, that she was being held hostage by a local hotel, simply because she did not want to follow the quarantine order.

Collier, a Queens native, is a chef and graduate of the Culinary Institute of America, as well as working as a JetBlue Airways flight attendant. She has made efforts on social media and YouTube to be an influencer, running a YouTube channel called “Lina’s Life,” where she posts videos about her career and life in New York. She started the channel in November 2019 and wrote in the about section, “A Lifestyle…. Lina’s Life. Travel, Vlogs, Beauty, Food and Fun!”

Collier was kidnapped or missing in Jamaica. But authorities say the was actually quarantined on the island after testing positive for COVID-19 when she arrived on January 28, 2021. Collier travelled to Jamaica with her mother and friends, according to her social media posts. She said was being held against her will at a resort and feared being trafficked.

On arrival in Jamaica, Collier who was tested positive for the Covid-19 virus was placed in isolation. This is in keeping with Jamaica’s Covid prevention protocols as stipulated by the Ministry of Health and Wellness. She remains in isolation and awaits medical clearance to be able to travel back home.

Collier was visited by the local police on Saturday, February 13 and she is not, nor was she at any time, in any danger. The Police are therefore warning persons to desist from sharing social media posts claiming Collier has been kidnapped, as sharing false information can constitute an offence under the law.

As stated in the police statement, Collier, “was visited by the local police on Saturday, February 13 and she is not, nor was she at any time, in any danger. The Police are therefore warning persons to desist from sharing social media posts claiming Collier has been kidnapped, as sharing false information can constitute an offence under the law.”

The Jamaica Gleaner was informed by the authorities that on January 28, Collier arrived in the country and was expected to depart on February 1. However, on 30 January, the newspaper notes that a COVID-19 antigenic test had a positive result.

A second test was negative one hour later. She took her third and positive test on February 2. The spa, Ocean Coral Spring, says Gleaner, informs Collier that she might stay there for 14 days without an extra expense in quarantine instead of spending time in governmental facilities.

On February 14, Collier also released a statement that she never said she was missing or abducted. After the initial positive test, Collier said she tested negative for coronavirus but was nevertheless needed to be quarantined at a hotel, the Ocean Coral Spring, for 14 days.

The statement by Collier, posted on Instagram, accuses the resort workers and Jamaican authorities of bullying and harassment. On February 14, Collier was allowed to leave the island and she and her mother flew back to New York, according to Nationwide90FM, a Jamaican news radio station.