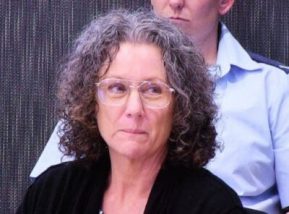 Kathleen Folbigg Bio: She is an Australian serial child killer who was convicted of murdering her three infant children, Patrick Allen, Sarah Kathleen, and Laura Elizabeth.

She was also convicted of the manslaughter of her fourth child, Caleb Gibson.

Following her father’s arrest on the day after the murder, Folbigg was made a ward of the state and placed into foster care with a couple.

On 18 July 1970, she was removed from their care and placed into Bidura Children’s Home. Two months later, Folbigg moved into a permanent foster care placement.

This arrangement lasted until she was a young adult. She left school at the age of fifteen and married Craig Gibson Folbigg in 1987.

Folbigg’s trial lasted seven weeks. The prosecution alleged Folbigg murdered her four children by smothering them during periods of frustration.

During a jury replay of Folbigg’s police interview, she attempted to run from the courtroom.

On 21 May 2003, Folbigg was found guilty by the Supreme Court of New South Wales jury of the following crimes: three counts of murder, one count of manslaughter and one count of maliciously inflicting grievous bodily harm.

On 24 October 2003, Folbigg was sentenced to forty years’ imprisonment with a non-parole period of thirty years.

On 17 February 2005, the court reduced her sentence to thirty years’ imprisonment with a non-parole period of twenty-five years on appeal.

Due to the nature of her crimes, Folbigg resides in protective custody to prevent possible violence by other inmates.

The 51-year-old mother was jailed in 2003 for at least 25 years for killing her four babies.

An inquiry into Kathleen Folbigg’s convictions for killing her four babies has reinforced her guilt, a former New South Wales district court chief judge has found.

Reginald Blanch QC, who presided over the inquiry, has concluded he does not have “any reasonable doubt as to the guilt of Kathleen Megan Folbigg”, in a report made public on Monday night.

The inquiry took place after Folbigg’s lawyers lodged a petition in 2015 casting doubt on some of the evidence that led to her conviction.

I hope that the conclusion of the inquiry, and the report’s findings, might provide comfort in some way to the relatives of Caleb, Patrick, Sarah, and Laura, and will dispel community concern regarding Ms. Folbigg’s convictions, the NSW attorney general, Mark Speakman, said in a statement on Monday.

Ms. Folbigg will continue to serve her sentence of 30 years imprisonment. She will be first eligible to apply for parole in 2028 at the conclusion of her 25-year non-parole period.