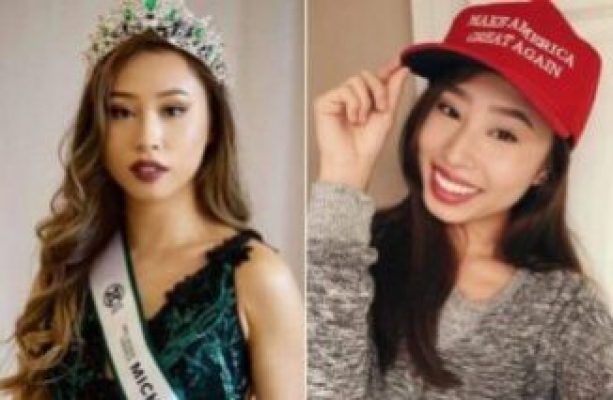 Kathy Zhu Bio: She is an American model, student of the University of Michigan, who was stripped of her title after the beauty pageant organization deemed her tweets insensitive and racist.

She was born in Qingdao, Shandong, China in 1999. Kathy grew up in Kissimmee, Florida. At the age of 5 together with her parents they legally migrated to the United States, Her parents are small business owners.

She has duo nationality Chinese and American.

Kathy is the vice president of the College Republicans at the University of Michigan.

Kathy Zhu was named the Miss Michigan on Sunday, 14 July but was stripped of her title on Thursday, July 18 due to her tweets which were deemed “insensitive and racist”.

Zhu was vetted Miss Michigan over email, requiring candidates to submit an email application and submit a video.

She claims she was asked to refrain from posting on social media until after Miss Indiana and Michigan World America account posted and announced the winners.

On Wednesday, July 17, Miss Indiana and Michigan World America posted a posted on their Facebook announcing Zhu as a national finalist. The post has since been deleted.

Stripped off The Miss Michigan Title

Kathy Zhu was dismissed Thursday as a Miss World America pageant participant when the organization described the content of her social media as “offensive, insensitive and inappropriate.” according to a letter from the pageant that she posted on her Twitter account.

Zhu is a well-known political commentator and online figure, amassing approximately 80,000 followers in her Instagram and Twitter accounts combined.

In 2018 while Zhu was enrolled at the University of Central Florida she attended a Hijab Day event but declined to try on a hijab. She later posted on Twitter, but the tweet has since been deleted.

“There’s a “try a hijab on” booth at my college campus. So you’re telling me that it’s now just a fashion accessory and not a religious thing? Or are you just trying to get women used to being oppressed under Islam.”

After the demand for her to be expelled, she tweeted;

“1) UCF is a public campus, meaning I can take pictures of anything, especially a public RSO group.
2) I took three pictures, you asked me if I want to wear this scarf of oppression, I politely declined, said thank you, and headed to class.
3) trying to get me expelled for what?”

After she was stripped of the Miss Michigan title in her email to DeJack she addressed the incidence alleging that a woman tried to make her wear a hijab without her permission. She added that what was insensitive was that women in the Middle East were getting stoned to death for refusing to obey their husband’s orders to wear hijabs.

“What’s ‘insensitive’ is that women in the Middle East are getting stoned to death for refusing to obey their husband’s orders to wear hijabs. Are the people in MWA implying that they advocate for the punishment of women who refuse to wear a hijab?”

She had also spoken about the hijab incidence with the Detroit Free Press where she said; “I said that it was (getting women used to) being oppressed because there are so many women in Middle Eastern countries that are being punished and stoned for refusing to wear a hijab. Nobody is talking about that in the West because all they see is everyone being at peace, but that is the beauty of America.”