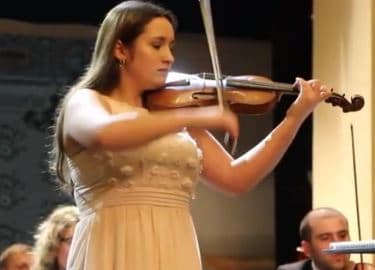 Katya Tsukanova Bio: She was a violin prodigy. She was the daughter of Russian bankers and philanthropists Igor Tsukanov and Natasha Tsukanova.

Together the couple runs the Tsukanov Family Foundation which is involved in funding art and music projects. Natasha Tsukanova is also chair of the London Philharmonic Orchestra’s board of governors.

She was born in 2002 in London. She is one of Britain’s leading young musicians and violin prodigy. Katya Tsukanova found dead on 18 June 2019 after a drug overdose.

She was awarded the best young musician award at the Suoni dal Golfo Music Festival in Lerici, Italy.

Katya has trained with Professor Zakhar Bron since 2012 and has performed in his class concerts in Russia, Japan, Switzerland, Austria, and Germany.

She won first place in her age group in the Golden Strings of America International String Competition (part of American Fine Arts Festival) in 2012.

Along with other first-place winners, she was offered an opportunity to perform at Weill Recital Hall in Carnegie Hall in New York.

She had performed in Moscow with the leading Russian string orchestra Moscow Virtuozi (directed by Vladimir Spivakov) and with Orchestra of St John’s in London.

In April 2017, Katya performed with the Georgian Philharmonic Orchestra conducted by Nikoloz Rachveli, at the historic Shota Rustaveli Theatre in Tbilisi (Georgia); and again with the same orchestra in December of 2017.

In March 2018 she performed Mozart Violin Concerto No. 3 in G major with the Armenian State Symphony Orchestra, under the baton of Serge Smbatyan, at the Aram Khachaturian Concert Hall in Yerevan (Armenia).

She died on 18 June 2019, her father Igor Tsukanov found her unconscious at the family home in west London in the early hours of June 18. She was rushed to hospital but doctors were unable to save her.

She died after ‘taking a deadly cocktail of cocaine and ketamine’ known as a Calvin Klein.

Igor Said: his daughter, who had performed at the Royal Opera House just days before her tragic death, was ‘so happy and had a bright future.

She was such a smart girl, and she made one bad choice.

What can we parents do?.

The children will do what they want anyway, and they never tell you the truth.

Katya was immediately rushed to hospital but could not be saved. Friends of the teenager told the paper the ‘Calvin Klein’ drug has recently been sweeping the London nightlife scene.

They said ‘Calvin Klein’ was ‘the new thing among Katya and her friends. ‘Not just them though – it’s everywhere.’