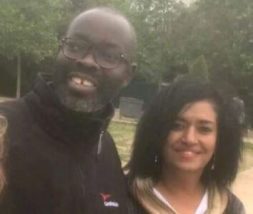 Ken Okoth Kibra MP Bio: He was a politician and the Member of Parliament for Kibra. Ken Okoth was born in 1978 in Kibra’s Kisumu Dogo.

He died on 26 July 2019 after a long battle with cancer which lead to multiple organ failure. He had been diagnosed with advanced colorectal cancer. When Okoth died he was at the age of 41 years old

He studied at Olympic primary and scored a massive 613/700 in his KCPE examinations to join Starehe Boys’ Centre where he first slept on a bed and that experience changed him completely.

He did his undergraduate studies at St. Lawrence University, USA, -German and European Studies. He has a masters in International Relations degree from Georgetown University.

He has 5 siblings and were raised by a single mother( Angelina.)His father abandoned them when they were young, he is the fourth born in the family.

He is married to a European however not much is known about his wife or their relationship.

Ken has done so many odd jobs including being a night guard of Goethe Cultural Institute. He has also ever been a receptionist at Masava Hospital.

He has also been a watchman at the Maendeleo ya Wanawake House premises. He was a volunteer at The Nation and at one time was a newspaper peddler. He was also an entrepreneur and philanthropist.

He was diagnosed with stage four colorectal cancer with metastases to the liver,” For over a year, he presented symptoms of ulcers, at times bacterial infections and that is what he was being treated for. He was even put on drugs to manage stress.

Okoth says that all that time, he was battling abdominal pain and weight loss. He was being treated for the wrong disease before his doctor finally asked him to take an advanced scan. It was already too late and that’s when his life turned around. The fear of the unknown that accompanies a cancer diagnosis is immense. Cancer changes your life completely.

On 26th July 2019 his brother Iman okoth confirmed that Ken had succumbed to cancer at the Nairobi Hospital at around 4 PM, he had asked his family to switch off the life support machine. His body has been moved to Lee Funeral Home in Nairobi.