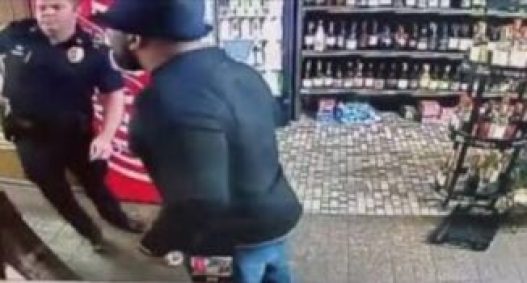 Kevin Penn is a black business owner armed who was mistaken for a robbery suspect when he called police because his store had been robbed. A white Alabama cop showed up police and punched Penn in the face, for mistaking him for the robber as Decatur Police Chief Nate Allen said today. The incident was caught on a video and has gone viral.

Penn owns Star Spirits & Beverages, a liquor store on Sixth Avenue in Decatur in north Alabama. Decatur Police Chief Nate Allen said his officers punched Penn because they thought he was the robber.

An armed black business owner mistaken for a robber was punched in the face by a white Alabama cop – after calling to report being robbed.

The situation happened nearly three months ago on March 15 but just became public due to this security clip… pic.twitter.com/zQQrfDSYHP

The video went public on Monday evening, but the incident in question took place on March 15. In the video, Penn can be seen having an argument with two white police officers before one of the officers steps forward and punches Penn in the face. A third police officer appears, and the three of them struggle to get Penn under their control.

During a press conference on Monday afternoon, Decatur police showed bodycam footage of the incident in which the police officer told Penn to lower his weapon, and Penn refused.

Who is Javier Ambler? Wiki, Biography, Age, Family, Wife, Cause of Death, Net Worth

Allen has defended the actions of his police officers, though he did confirm that the officer who punched Penn has been put on desk duty pending a full investigation of the incident. Allen also said his department has been investigating the incident since the day after it happened.

Per AL.com, Allen said, “I would much rather have a punch than an officer-involved shooting.”

Following the altercation with police, Penn was handcuffed and arrested for obstructing governmental operations. Per court records, the officers said he was preventing them from investigating the robbery.

Penn also suffered long-term physical injuries from the incident, according to his lawyer. He had a broken jaw, his lawyer says, and had to undergo several weeks of treatment, which included getting his jaw wired shut. His lawyer also pointed out that it was Penn who called the police and asked for help, and who had apprehended a shoplifter and was waiting for police to arrive.

According to AL.com, Penn’s lawyer said Penn showed the gun to the officers to make sure they knew he was armed, then took out the clip and ejected the bullet from the chamber to make it clear to them he wasn’t dangerous.

Now, many people online are calling out what they claim to be racism and police brutality, with several users wondering if Penn would have been punched or mistaken as the robber if he was white. “Alabama police punched & arrested a black business owner who reported a robbery,” one person tweeted. “This happened in March and the only reason you are hearing about it is that like the other videos this was leaked. His jaw was broken and some of his teeth. We can’t afford to have bad cops.”

Still, others are looking for ways to support Penn and his shop. Penn has not yet spoken out publicly about his experience.