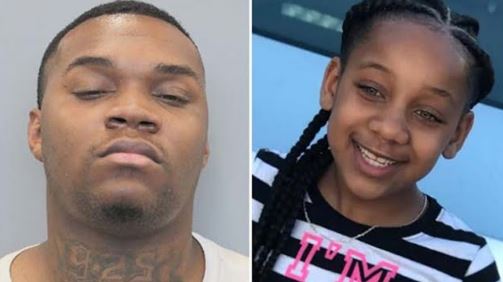 Khylie Sorrells was a Texas girl who was allegedly killed by her mother’s ex-boyfriend, who was taken into custody in Houston late Tuesday evening.

Sorrells died less than a month before her 10th birthday. Now her mother is raising money for funeral expenses.

In the description for a GoFundMe campaign raising money for the girl’s funeral expenses, Khylie Sorrells is remembered by her mother, Brittany, as a loving big sister who excelled at basketball.

“She was an MVP star basketball player for [the] PAL basketball team in Houston,” the grieving mother wrote. “She loved making TikTok videos and loved her two sisters.”

She was 9 years old.

Khylie died late Monday after she was shot in the head during an alleged domestic disturbance. Police identified her mother’s ex-boyfriend, 22-year-old Jeremiah Jones, as her alleged killer.

Khylie died less than a month before her 10th birthday. Her mother wrote that Khylie was excited to start fifth grade in the fall.

Jones was arrested by a SWAT team Tuesday night and charged with capital murder and aggravated assault with a deadly weapon.

According to court records obtained by KPRC-TV, Khylie’s mother broke up with Jones two months ago.

The station reports Sorrells told investigators she was in bed with Khylie and her other children, watching a movie, when Jones, who was out on bond for an evading arrest charge, arrived at her apartment, demanding that she return a television he believed was his.

According to the court documents, Jones allegedly ripped the TV off a living room wall and then accused Sorrells of seeing another man.

Jones allegedly first shot his ex-girlfriend in the shoulder before going into the bedroom, where he reportedly shot and killed Khylie before he fled.

Sorrells is expected to recover from her gunshot wound. Khylie’s sisters were also in the home during the shootings but were unharmed.

It was unclear Thursday what pleas Jones had entered to the charges pending against him. Information on his lawyer was also unavailable.

Before his arrest, Jones spoke to FOX 26 and denied having anything to do with Khylie’s killing.