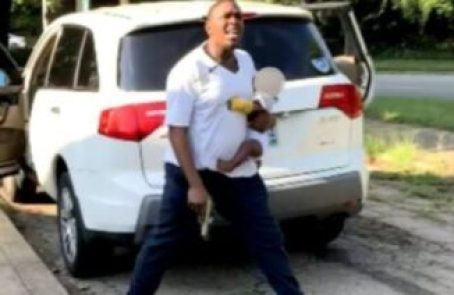 Ladon Penn is a 31-years-old man from Ohio who shot at and struck a woman after a minor car crash in which no damage was reported. He shot while he was holding a baby. He is arrested and charged with three counts.

According to police, the 54-year-old victim said she was in “a minor, non-damage car crash” earlier on Wednesday when the other driver, a woman, tells her: “I’m gonna go get my man, you better go get yours.” Both groups left the scene “after words were exchanged,” police said. But shortly after that, the other woman returned with Penn.

“The victim says that Penn walked out of his car, walked into a home, and reappeared with a gun,” police said.

Then, while holding the toddler, Penn allegedly opened fire on the victim and the two women with her. Police said one of the fired bullets ricocheted and grazed the victim, and Penn and the others fled from the area. Investigators found video footage that showed Penn “firing his gun while holding an infant.” One screenshot of the video shows the baby clutching Penn’s left side as Penn holds the gun in his right hand. Police later stopped him and found him to own a 9mm handgun.

On Wednesday, Cincinnati Police arrested and charged Penn with three counts of felonious assault, child endangerment, and “weapons under disability” shortly after he opened fire, the department said Thursday.

After a shooting in District One on Wednesday, 31-Ladon Penn was charged with three counts of felonious assault, Child Endangering and Weapons Under Disability. A video recovered from the scene shows Penn firing multiple shots while holding an infant. Details in the post below: pic.twitter.com/Xto20TNrz1