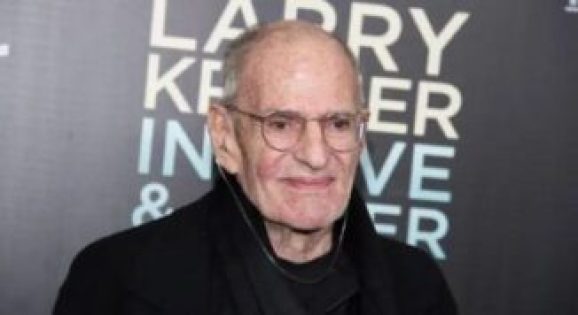 Larry Kramer was a writer, playwright, and outspoken AIDS activist. He has died in his Manhattan apartment on Wednesday, May 27.

Kramer’s husband David Webster confirmed to the New York Times that the cause of death was pneumonia. Kramer had battled illnesses for years; he’d been infected with H.I.V., the virus that causes AIDS, and had a successful liver transplant after contracting the liver disease.

Kramer was born in Bridgeport, Connecticut, and considered an “unwanted child” by his Jewish parents, an attorney, and a social worker. When the family moved to Maryland they found themselves in a much lower socioeconomic bracket than that of Kramer’s high school peers. Kramer had become sexually involved with a male friend in junior high school, but he dated girls in high school.

Kramer enrolled at Yale University in 1953.  Kramer’s father, older brother Arthur, and two uncles were alumni. Kramer enjoyed the Varsity Glee Club during his remaining time at Yale, and he graduated in 1957 with a degree in English.

In his life, Kramer developed a reputation as a fiery AIDS spokesperson who repeatedly berated the government and the gay community for their apathetic response to the epidemic. Kramer referred to the AIDS crisis as a holocaust throughout his life and wrote the book, Reports from the Holocaust: The Making of an AIDS Activist, in 1989. His career as a writer for the stage, the screen, and the library shelf put the AIDS epidemic front and center, and his aggressive work for AIDS organizations was credited with “putting the medical treatment in the hands of patients” by Dr. Anthony Fauci.

In 1989, Kramer found out after testing that he was carrying the virus that causes AIDS. In an afterword to a later edition of his book Reports From the Holocaust: The Making of an AIDS Activist, he wrote, “A new fear has now joined my daily repertoire of emotions, and my nighttime ones, too. But life has also become exceptionally more precious and, ironically, I am happier.”

He became ill over many years and started putting his affairs in order, believing he would die soon. The Associated Press even published an article in 2001 saying he’d died. However, it wasn’t the case, and the H.I.V. hadn’t progressed. Instead, he was suffering from liver disease, a terminal infection linked to a hepatitis B infection he’d had years before. Kramer received a liver transplant in 2001, just a few days before Christmas. Afterward, his friendship with Fauci deepened and the infectious diseases expert helped him get into an experimental drug trial.

Kramer married his longtime partner Webster in 2013 in the intensive care unit of the NYU Langone Medical Center. Kramer had just undergone surgery for a bowel obstruction. In a phone interview, Webster told the Times that the date had been set before the health problem came up. “I had been traveling when Larry went into the hospital,” Mr. Webster said, “and when I was back and he was able to talk, he told me he had invited 20 people to the I.C.U. for the wedding. So it turned into a little party at his bedside.”

Kramer’s relationship with his brother, Arthur Kramer, founding partner of the law firm Kramer Levin, exploded into the public sphere with Kramer’s 1984 play, The Normal Heart.

In the play, Kramer portrays Arthur (as Ben Weeks) as more concerned with building his $2 million houses in Connecticut than in helping his brother’s cause. Humorist Calvin Trillin, a friend of both Larry and Arthur, once called The Normal Heart “the play about the building of [Arthur’s] house”.

Anemona Hartocollis observed in The New York Times that “their story came to define an era for hundreds of thousands of theatergoers”.  Arthur, who had been his younger brother’s protector against the parents they both disliked, couldn’t find it in his heart to reject Larry, but also couldn’t accept his homosexuality.

This caused years of arguing and stretches of silence between the siblings. In the 1980s, Larry wanted Arthur’s firm to represent the fledgling Gay Men’s Health Crisis, a nonprofit Larry organized. Arthur said he had to clear it with his firm’s intake committee.

Larry called for a gay boycott of MCI, a prominent Kramer Levin client, which Arthur saw as a personal affront. In 1992, Colorado voters passed Amendment 2, an anti-gay-rights referendum, and Arthur refused to cancel a ski trip to Aspen.

Throughout their disagreements, they still stayed close. Larry writes of their relationship in The Normal Heart: “The brothers love each other a great deal; [Arthur’s] approval is essential to [Larry].”

In 2001, Arthur gave Yale a $1 million grant to establish the Larry Kramer Initiative for Lesbian and Gay Studies, a program focusing on gay history.

Kramer Levin went on to become one of the gay rights movement’s staunchest advocates, helping Lambda Legal Defense and Education Fund on such high-profile cases as Lawrence v. Texas before the U.S. Supreme Court and Hernandez v. Robles before the New York Court of Appeals. Arthur Kramer retired from the firm in 1996 and died of a stroke in 2008.

we will soon update the Larry Kramer net worth details