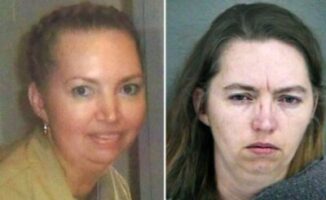 Lisa Montgomery was convicted in 2004 of strangling to death a Missouri woman who was eight months pregnant, cutting the baby out and kidnapping it. The baby survived. She will become the first female inmate to be executed by the U.S. government in 67 years when she will be given a lethal injection in Indiana on 8 December.

On 16 December 2004, Montgomery, entered the home of 23-year-old Bobbie Jo Stinnett whom she had befriended on an online chat forum.

It is thought that the two women had never met in person until Montgomery called at Stinnett’s house in Skidmore, Missouri, under an assumed alias ‘Darlene Fischer’ a prospective buyer of a rat terrier puppy from Stinnett’s dog-breeding business – Happy Haven Farms.

It is believed that Stinnett, who was eight months pregnant, let Montgomery into her home believing her to be a legitimate customer. She was subsequently attacked by Montgomery, who strangled her from behind with a piece of cord then slit open her stomach with a kitchen knife, before removing the unborn baby which she then took home.

Stinnett was found in a pool of blood about an hour later by her mother Becky Harper, she was rushed to hospital where doctors tried to revive here but pronounced dead soon after arrival.

Montgomery was arrested at her farmhouse in Kansas the following day while the new-born baby girl was returned to its father. In October 2007, she was tried and convicted for “kidnapping resulting in death” – jurors returned a verdict that Montgomery was guilty of murder and on 26 October 2007.

Lisa Montgomery was scheduled to be executed on December 8 after she was convicted in 2004 of strangling to death a Missouri woman who was eight months pregnant, cutting the baby out and kidnapping it. The baby survived.

The execution date this month was postponed by the court because two of Montgomery’s lawyers, who were planning to seek clemency for her, fell ill with coronavirus.

She was served a death sentence by Senior District Judge Gary A. Fenner. The prosecution claimed that the attack was premeditated and the death penalty decision was upheld on 4 April 2008.

Lisa Montgomery is scheduled to be put to death on Dec. 8 for the 2004 murder of a pregnant woman in Missouri. https://t.co/m8r80uwNpr