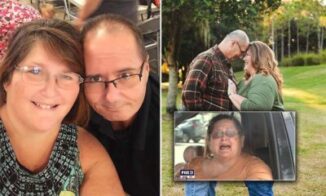 After battling COVID-19 in the hospital, a Florida lady named Lisa Steadman claims she returned home to a “nightmare” scenario, with her spouse died from the virus.

Lisa Steadman said she was shocked to enter into their Winter Haven home on Wednesday to find her 55-year-old husband Ron dead in the bedroom, according to Fox13 News.

She said to the news station, “It was like walking into a horror film, and I wish I had never seen him like that because I can’t get that picture out of my head,”

According to Steadman, neither of them had been vaccinated before they both tested positive for the virus.

She went to Winter Haven Hospital’s emergency room after experiencing symptoms that prompted her to pass out. She said that Steadman tried to keep in touch with her husband, who was having phone troubles, while she was in the hospital for eight days.

According to the WFLA, she said, “He had told me that his phone was acting up, and wouldn’t hold a charge. Monday, I couldn’t get ahold of him. So I sent the Winter Haven Police Department over there to do a wellness check. They talked to him. He was fine,”

When she couldn’t reach him the next day, she assumed it was due to phone problems.

When she got home on Wednesday, however, she discovered the awful scenario. She added, “It’s just been a nightmare. Just a nightmare,”

“I can’t get that picture out of my mind. I wish I never would have found him like that,”

She continued, “He was a humble, friendliest, willing-to-help-anyone, God-fearing family man,”

Steadman, who is still suffering from virus symptoms, said she intends to get vaccinated next month. She said to the WFLA, “Now after being in the hospital and talking with my doctor, when I am able to take it, I will in September,”