Home › Who is Little Richard? Wiki, Biography, Age, Wife, Children, Cause of Death, Net Worth 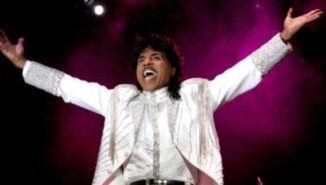 Little Richard, was an American singer, songwriter, and musician. An influential figure in popular music and culture for seven decades, Penniman’s most celebrated work dates from the mid-1950s, when his charismatic showmanship and dynamic music, characterized by frenetic piano playing, pounding backbeat and raspy shouted vocals, laid the foundation for rock and roll, leading him to be given the nickname “The Innovator, The Originator, and The Architect of Rock and Roll”.

Little Richard left home by the time he was 13 and was taken in by a white family who owned a club in Macon. That’s where he started honing his craft and unique style as a performer. In 1951 he got his first record contract with RCA, but they stifled him by signing him to do low key blues songs where he was unable to use his trademark screams and wails.

In 1955 he found his success using his signature style when a producer from Specialty Records hired him on to be the frontman for a New Orleans group. That year his first hit, “Tutti-Frutti” made it to number 17 on the Billboard Charts. From there he followed up with other songs that became huge hits. “Long Tall Sally,” “Good Golly Miss Molly,” and “Send Me Some Lovin’” have all stood the test of time.

Little Richard had a strong faith in Christianity, yet he also said he knew that he was attracted to men, and the two didn’t jive. In a 2017 interview with Three Angels Broadcasting Network, Little Richard said, “Anybody that comes in show business, they gon’ say you gay or straight,” he said. “God made men, men and women, women… You’ve got to live the way God wants you to live… He can save you.”

Singer Roberta Flack inducted Little Richard into the Rock & Roll Hall of Fame in 1986. She said, “He has not only made important contributions to our musical culture and our history…good music lasts forever and ever and Little Richard’s music has made such a strong impression on all of us. We dance to it; hum along with it. We’ve been affected by it. Little Richard’s art is honest and true and as such it cannot be denied.”

However Little Richard could not be there to accept the award as he’d been in a bad car crash in October of 1985 and could not walk at the time of the award ceremony. His brother-in-law Marvin Blackman accepted the award on his behalf.

Penniman met his only wife, Ernestine Harvin, at an evangelical rally in October 1957. They began dating that year and wed on July 12, 1959, in California. According to Harvin, she and Penniman initially enjoyed a happy marriage with “normal” sexual relations. When the marriage ended in divorce in 1964, Harvin claimed it was due to her husband’s celebrity status, which had made life difficult for her.

Penniman would claim the marriage fell apart due to his being a neglectful husband and his sexuality. Both Robinson and Harvin denied Penniman’s claims that he was gay and Penniman believed they did not know it because he was “such a pumper in those days”. During the marriage, Penniman and Harvin adopted a one-year-old boy, Danny Jones, from a late church associate. Penniman and his son remained close, with Jones often acting as one of his bodyguards. Ernestine later married Mcdonald Campbell in Santa Barbara, California, on March 23, 1975.

Richard Wayne Penniman was born in Macon, Georgia, on December 5, 1932, the third of 12 children of Leva Mae (née Stewart) and Charles “Bud” Penniman. His father was a church deacon and a brick mason, who sold bootlegged moonshine on the side and owned a nightclub called the Tip In Inn. His mother was a member of Macon’s New Hope Baptist Church. Initially, his first name was supposed to have been “Ricardo”, but an error resulted in “Richard” instead.

He died on May 9, 2020, at the age of 87, Rolling Stone reported Little Richard’s son, Danny Penniman, confirmed the death to them. According to the New York Times his cause of death was cancer.

Mick Jagger of the Rolling Stones wrote on Instagram, “When we were on tour with him I would watch his moves every night and learn from him how to entertain and involve the audience and he was always so generous with advice to me. He contributed so much to popular music. I will miss you, Richard, God bless.”

Cyndi Lauper tweeted, “So sad Little Richard passed away. He married my husband and I. He was really one of the truly great rock and roll singers and one of the rock and roll pioneers. He will be missed.”

Senior Writer at Rolling Stone tweeted, “Little Richard was the only person in this special issue of @RollingStone who profiled himself. No need to explain why, but he did anyway in these classic first two lines: “A lot of people call me the architect of rock & roll. I don’t call myself that, but I believe it’s true.”

Richard’s net worth is to be $40 million.