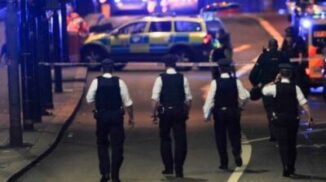 A possible London Bridge terror attack has left multiple victims injured, the Metropolitan Police in London, England confirmed on November 29, 2019. Eyewitness reports on Twitter indicated that hero bystanders tackled the man. Photos showed the suspect’s body crumpled on the pavement. One video shows a bystander running away with a knife after police shot the man. It also captures the moment that the police shot the suspect.

Police said in a news conference that “a device that was strapped to the body of the suspect was a hoax explosive device.”

“Police were called at 1:58 pm to a stabbing at premises near to London Bridge,” Met Police wrote in a statement. “Emergency services attended, including officers from the Met and @CityPolice. Police have detained a man. We believe several people have been injured. Further info to follow.”

Please stay away from #LondonBridge! I just saw a man with a knife being shot in the head by police. Please be careful London! pic.twitter.com/BotIffaLJ0

Police Chief Neil Basu said in a press conference: “Specialist armed officers shotted a male suspect from City of London Police, and I can confirm that this suspect died at the scene.”

A truck was jack-knifed on the bridge, and six people may be wounded, according to Sun.

The man’s name was not released, but police said that they are treating the stabbings as a terror attack at this point. “At this stage, the circumstances relating to the incident at #LondonBridge remain unclear. However, as a precaution, we are currently responding to this incident as though it is terror-related,” the police wrote. “One man has been shot by police. We will provide further information when possible. Several people have been stabbed. We will provide further information when possible.”

Suspect Shot Down By Police

A man with a hoax device strapped to him has been shot dead in central London by police officers in a terrorist incident that’s left several people injured, some seriously.

Officers have not commented further on the motive for the attack near London Bridge. Still, Assistant Commissioner Neil Basu told a press conference on Friday afternoon that they were enhancing patrols in the area and across the city in response.

Video filmed at the scene by an eyewitness showed a man being wrestled to the ground by members of the public. The incident comes more than two years after eight people were killed and dozens more wounded in a terror attack at London Bridge.
London Bridge timeline