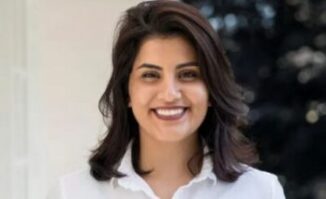 Loujain al-Hathloul is a Saudi Human rights activist, a social media figure, and a political prisoner. She is a graduate of the University of British Columbia.

She was born on 31 July 1989 in Jeddah, Saudi Arabia. 30 years old Loujain has been arrested and released on several occasions for defying the ban on women driving in Saudi Arabia and was arrested on May 2018, with several prominent women’s rights activists, on the charge of attempting to destabilize the kingdom.

She was ranked third in the list of Top 100 Most Powerful Arab Women 2015. As of October 2018, her ex-husband, Saudi stand-up comedian Fahad Albutairi, was also under arrest.

Al-Hathloul is known both for her role in the women to drive movement and in opposing the Saudi male guardianship system.

On 1 December 2014, she was arrested and detained for 73 days after an attempt to cross the border in her car from the United Arab Emirates (UAE) to Saudi Arabia on charges related to defying the female driving ban in the kingdom.

She has a UAE license but the Saudi police still arrested her.

In September 2016, along with 14,000 others, al-Hathloul signed a petition to King Salman asking for the male guardianship system to be abolished.

On 4 June 2017, she was arrested and detained at King Fahad International Airport in Dammam. The reason for the arrest was unclear and al-Hathloul had not, as of June 2017, been allowed access to a lawyer or contact with her family.

Jailed Saudi women’s rights activist Loujain al-Hathloul has rejected a release deal that would have granted her freedom in exchange for denying that she was subjected to torture, according to her family.

Hathloul, who was arrested in May 2018 as part of a crackdown on government critics, initially agreed to sign a document denying the torture, her brother Walid al-Hathloul wrote on Twitter Tuesday.

But when Saudi security officials requested she make the statement on camera, she rejected the offer, Walid added.

“When the state security asked her to sign the document for the video release, she immediately ripped the document,” Walid wrote.

“She told them by asking me to sign this document you are involved in the cover-up and you’re simply trying (to) defend Saud Al-Qahtani who was overseeing the torture.”

Activists have accused Qahtani, a former top adviser to Crown Prince Mohammed bin Salman, of involvement in the torture.

CNN’s attempts to reach Qahtani through the Saudi government were unsuccessful and Saudi authorities did not immediately respond to CNN’s request for comment on the torture allegations.

Qahtani was removed from his post after he was implicated in the October 2018 murder of Saudi journalist Jamal Khashoggi.

It’s urgent to clarify that our silence in the last few weeks was intended to solve the case privately. We were hoping a gesture of good faith but I found out that when there’s silence there’s an escalation against Loujain whether thro bad treatment or making unrealistic requests