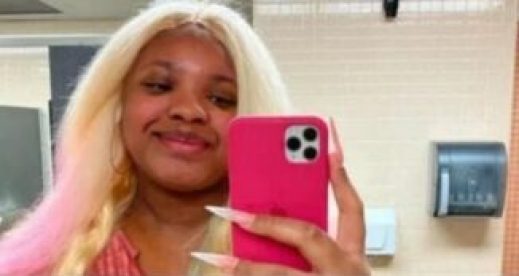 Lovely Peaches, whose real name is Brittany Johnson, On August 7 and 8, many reports surfaced online that internet personality had lost custody of her daughter, Cora. Johnson is a 19-year-old TikTok star and internet personality who rose to fame on social media for her strange and often disturbing posts. Her posts and videos often involved threatening her child and laughing about harmful things she would do to her young daughter.

Johnson gained a social media following for her controversial videos and posts. Johnson’s actions and threats toward her daughter were well-documented on her social media, sparking a couple of petitions on Change.org calling for her arrest. At the time of writing, one of those petitions had reached nearly 200,000 signatures. The Louisiana native had posted multiple videos claiming that she would sell her baby to $ex traffickers and laughing about the $exual assaults that her baby had allegedly suffered.

It’s unclear exactly how old Cora is, with some outlets reporting that she’s eight months old and others saying she’s now a few years old.

Johnson also released some music and her artist profile has over 60,000 monthly listeners on Spotify. Her best known songs are “You Don’t Know Me” and “Burnin’ N’ Itchin’.”

Johnson Had Lost Custody of Her Daughter

On August 6, Children’s Riot, whose mission is to “change laws in order to better protect every child from trafficking and exploitation,” posted to Instagram to say that Cora is “safe” and “being taken care of.” They confirmed this following the “multiple phone calls we’ve made personally to the FBI, Police, [Child Protective Services]” and others.

The organization also acknowledged that Cora may have been in her grandparents’ custody during this time and not in Johnson’s custody as many believed: “If some of the other theories end up being true and Cora has been with her grandparents this whole time, is safe and has been safe, than we will be even happier, because she has been safer longer, and not in pain like we saw in the videos.”

The Salvation Foundation, whose mission is to “aid in the awareness, prevention, rescue and rehabilitation of $ex trafficking victims and survivors” also posted about Johnson on Instagram, writing that the work of the public, the FBI and others made sure that “Lovely Peaches will not be able to hurt her daughter again.”

A Post Millenial article from April 2020 wrote that the FBI confirmed that Cora had been removed from Johnson’s custody at a young age and the two have not been in contact since Cora was about 8 months old.

According to a Dexerto report, an FBI investigation was recently launched and Cora was removed from Johnson’s custody. On August 6, multiple organizations reported that Cora is now safe and no longer with Johnson. However, some people took to social media to state that Cora wasn’t in Johnson’s custody to begin with and the recent videos of the two together were taken during a visitation.

Amidst these child custody reports, all of Johnson’s social media accounts were removed. According to multiple users on Reddit, all of her accounts have been deleted, including TikTok, Instagram and Snapchat. It’s unclear at this time if they were all deleted for breaking community guidelines or if Johnson deleted them herself.