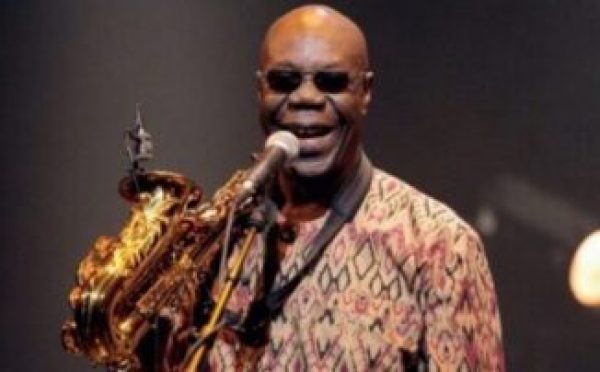 Manu Dibango was a musician and songwriter from Cameroon, who died from complications of the coronavirus in France. He was best known for his 1972 hit “Soul Makoosa,” He also played saxophone and vibraphone. Dibango developed a musical style fusing jazz, funk, and traditional Cameroonian music. His father was a member of the Yabassi ethnic group, though his mother was a Duala.

In 1941, after being educated at his village school. Dibango was accepted into a colonial school, near his home, where he learned French. He admired the teacher, whom he described as an extraordinary draftsman and painter. In 1944, French president Charles de Gaulle chose this school to perform the welcoming ceremonies upon his arrival in Cameroon.

He was a member of the seminal Congolese rumba group, African Jazz, and has collaborated with many other musicians, including Fania All-Stars, Fela Kuti, Herbie Hancock, Bill Laswell, Bernie Worrell, Ladysmith Black Mambazo, King Sunny Adé, Don Cherry, and Sly and Robbie.

He achieved a considerable following in the UK with a disco hit called Big Blow, originally released in 1976 and re-mixed as a 12 single in 1978 on Island Records. In 1998, he recorded the album CubAfrica with Cuban artist Eliades Ochoa. At the 16th Annual Grammy Awards in 1974, he was nominated in the categories Best R&B Instrumental Performance and Best Instrumental Composition for Soul Makossa. The song Soul Makossa on the record of the same name contains the lyrics makossa.

According to Dibango, the line is from his 1972 single Soul Makossa. Agence France-Presse reported that Jackson admitted that he borrowed the line for Wanna Be Startin’ Somethin’ and settled out of court.

“Soul Makossa” was one of the earliest hits in the nascent world music scene, including a catchy hook copied by some of the world’s biggest pop stars.

Manu Dibango died Tuesday with the coronavirus, according to his music publisher. He was 86. Dibango was hospitalized with an illness “linked to COVID-19,” his official Facebook page said last week.