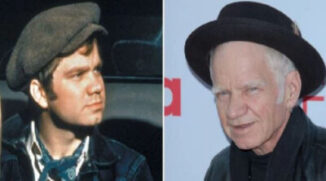 Michael J. Pollard was an American character actor. He was born on May 30, 1939, in Passaic, NJ and died on November 21, 2019. He has died at the age of 80. Pollard was best known for playing C.W. Moss in the 1967 film Bonnie and Clyde. He earned an Academy Award for Best Supporting Actor nomination.

RIP Michael J. Pollard. His legacy will live on forever through his work in HOUSE OF 1000 CORPSES, SCROOGED, BONNIE AND CLYDE, and many others. pic.twitter.com/Y7I9TxZ8wD

Pollard starred in Dirty Little Billy, revisionist biography of Billy the Kid at the beginning of his criminal career, set in Coffeyville, Kansas:

In 1974, he played the role of a young man dying of cancer, in the season one opening episode, “The Time of His Life”, of the trucking TV series Movin’ On. He later had a key supporting role in the 1980 cult film Melvin and Howard about the Melvin Dummar-Howard Hughes Mormon Will controversy. Pollard also starred in 6 episodes of the failed CBS comedy series Leo & Liz in Beverly Hills (1986) with Harvey Korman and Valerie Perrine.

Michael J. Pollard was one of a kind. Made every film he was in better. You sat up and took notice. I met him once on the street in Beverly Hills and tried to pay him a compliment. He growled at me. I mean – literally growled at me. It was a perfect moment. pic.twitter.com/0YMjJQiqnt

In 1992, he starred in a sixth-season episode of Ray Bradbury Theater, The Handler, in which he portrayed a mortician who tried to give his clients a little extra treatment that he thought they should have. In 1993, he appeared in the horror film, Skeeter. In 1997, he played the role of Aeolus in The Odyssey starring Armand Assante.

Pollard continued to work in film and television into the 21st century, including his appearance as “Stucky” in the 2003 Rob Zombie-directed cult classic House of 1000 Corpses.

He was married to Beth Howland, who was an American actress. She worked on stage and television and was best known for playing Vera Gorman in Alice, the sitcom inspired by the Martin Scorsese film Alice Doesn’t Live Here Anymore. She died on December 31, 2015

Farewell to the great Michael J Pollard, for whom the phrase character actor may as well have been invented. And what a character. Unforgettable (and Oscar nominated) as CW Moss in Bonnie & Clyde and a welcome presence in so many movies that you can list below. He will be missed. pic.twitter.com/L1Ve9VeXPN