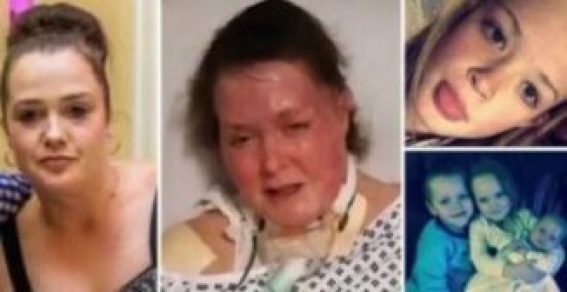 Michelle Pearson was a 37-year-old girl, who lost four of her kids to a horrific petrol bomb attack in 2017. She died on 25 August 2019 of her injuries.

On 11 December 2017 Zak Bolland, currently serving a minimum of 40 years for murder, threw a large petrol bomb through a rear window of the Pearson family home, killing four children.

Manchester Crown Court heard that the petrol bomb attack was the devastating climax of a feud involving Michelle’s eldest son, Kyle, who escaped the blaze, and Zak Bolland.

The feud was reportedly started over a second-hand Peugeot worth a few hundred pounds.

According to reports, Bolland along with accomplice David Worrall was fuelled by drink and drugs in the sick attack.

Worrall threw a smaller bomb that didn’t cause significant damage but was also convicted of murder and is currently serving a minimum 37-year term.

Flames engulfed the house, killing Demi, Brandon and Lacie, who were asleep in a front bedroom.

Her son, 16-year-old Kyle escaped the blaze with a friend.

At a trial in May the following year, Bolland’s then-girlfriend Courtney Brierley, 21, was cleared of murder and found guilty of four counts of manslaughter after the court heard she assisted Bolland and Worrall.

What happened to Michelle

Following the horrific attack in December 2017, Michelle was placed in an induced coma for five months, missing her children’s funeral as she received specialist care for burns covering her entire body.

Michelle’s mum, Sandra Lever said it took the critically ill and traumatised woman a while to understand that four of her children had died.

Speaking on the Jeremy Kyle show in October 2018, Sandra revealed it was her who had to break the tragic news to her daughter.

She said: It either had to come from me or the nurses. It was only because Michelle asked me.

I was talking about the grandkids, the youngest one. Michelle said ‘where’s my baby?’ I said ‘Lia’.

We did tell her numerous times that Lia had passed away in the fire but she got, like, in denial.

She just kept asking every day. Kept forgetting and forgetting.

It lasted for about six weeks before it sunk into her.

Michelle’s family have revealed the extent of their struggle following the fire as Michelle’s condition remained unstable and they tried desperately to keep their remaining family out of the spotlight.

Her mother wrote in June: We have been reluctant to share Michelle’s journey over the past few months as we have been focusing on getting her better.

Also trying to keep away from the public eye to allow Michelle and the family to grieve.

Michelle’s health has deteriorated in the past 10 weeks, Michelle is still in critical health and still remains in hospital until further notice.

Michelle Pearson Death and Cause

On the rare occasions that Michelle did appear in public, it was to pay tribute to her kids.

At a vigil in December 2018, a year on from the attack she thanked everyone for their support.

Speaking from her hospital bed, Michelle said: First of all, I’d like to thank all the firefighters for what they have done.

And in February, Michelle gave a touching tribute to her children. From a wheelchair, she released balloons outside the hospital.

In March this year, she presented a £1,000 cheque to doctors and nurses at the Wythenshawe burns unit, where she was receiving specialist care.

The donation was raised by family, friends and well-wishers through a number of fundraising efforts, including a vigil to mark the one year anniversary of the tragedy.

"Sadly last night, After a hard 20 months of fighting. Our beautiful Michelle gained her wings and went to join her babies."https://t.co/2jfjenkPDU

Petrol bombers laugh and joke before attack that killed 4 kids

Zak Bolland and David Worrall could face a fresh murder charge after Michelle Pearson dies 20 months after the petrol bomb attack in Salford, Greater Manchester, killed 4 of her 5 children