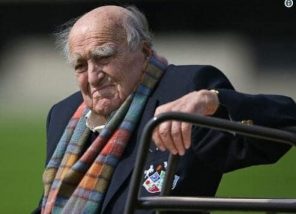 He was an English rugby association footballer who played flanker for Harlequins, Britain and the Savages, and was the Leader of the Brute Football Club and Leader of the East India Club, London.

He was educated at Rugby School and Gonville and Caius School, Cambridge, and played for Cambridge in The Varsity Match in 1945 and 1946.

He picked up 9 tops for Britain, playing in every one of the 4 coordinates in the 1946-47 season and each of the 5 coordinates in the 1947-48 season. In his last global, against France in Walk 1948, Steele-Bodger needed to move to scrum-half when Richard Madge left the field, in spite of experiencing blackout himself.

Foremost cruciate tendon damage finished his playing profession anyway in 1949. In this way, he was a selector for Britain and the Lions, Leader of the Rugby Football Association in 1973-74, and Director of the Worldwide Rugby Board.

In 1948, he introduced the yearly convention of conveying a visitor Steele-Bodger XV to play Cambridge College as a warm-up to The Varsity Match.

He was selected a CBE in the 1990 New Year Respects “for administrations to Rugby Association Football.”

We are deeply saddened to announce the passing of our legendary club President Micky Steele-Bodger.

He's a presence and personality we will geatly miss. One of a kind. pic.twitter.com/PpNyIY1hRB

We are saddened to hear of the passing of Old Rugbeian, Micky Steele-Bodger CBE

He was a man that embodied what it means to be a Rugbeian. Photographed here starting the Global Pass 2 years ago