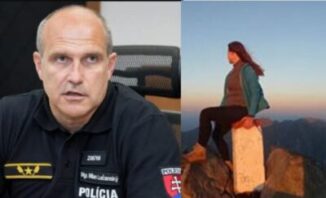 Milan Lučanský was an Former Police Corps president, who was facing corruption-related charges attempted suicide yesterday. He was a Slovak police general, president of the Slovak Police Force from 2018 to 2020

He was born on 10 February 1969 in Poprad, Slovakia. Lučanský graduated in 1988 from the Secondary Vocational School of Chemistry in Svit . From 1998 to 2003 he studied at the Faculty of Education of Matej Bel University.

At the end of May 2018, it was announced that the SMER-SD party had found a successor to the then PZ president, Tibor Gašpar. Lučanský was considered the right hand of Robert Kaliňák. He has been President of the Police Force since 1 June 2018. PZ should be at the head of the PZ until the law on the selection procedure for this post enters into force.

During his tenure, he suspended the director of NAKA from the investigation into the murder of Ján Kuciak and Martina Kušnírová, as well as ordered a check after incorrect information from NAKA regarding criminal complaints against the organizers of protests for Decent Slovakia.

Interior Minister Roman Mikulec left Lučanský in office to cooperate in the fight against coronavirus. Subsequently, there should be a discussion between them about Lučanský’s further work.

On 30 June 2020, Lučanský announced that he had applied for his resignation on 31 August. The reason was that he did not get along with the Minister of the Interior Roman Mikiloc and the leadership of the ministry. In his statement, he wrote, among other things,

“I do not trust them and they do not have mine. Cooperation must be based on mutual respect. I acknowledge that I perceive Roman Mikulec as a correct person, but I do not recognize him as Minister of the Interior. Our views on the future of the police are different, our views on several topics are different. ” He also rejected the politicization of the position of police president.

Milan Lučanský was married to his wife Martina Lučanská

Lučanský was detained on December 3, within the Operation Judáš (Judas). He has been charged with accepting a bribe. Some of his former colleagues said that he received more than €0.5 million in the years 2018 and 2019. NAKA accused 8 people of serious crimes, including Lučanský.

Two people are testifying against the former police chief. One is Norbert Paksi, former deputy head of the special police tasks department, who was detained in late October together with Special Prosecutor Dušan Kováčik, who has since resigned from the post. He has been charged with various crimes, including establishing and plotting an organised crime group.

Another is businessman František Böhm, who is suspected of having ties to the Takáčovci organised crime group.

Former Chief of #Slovak Police Milan Lučanský died at the age of 51 on Wednesday, former Interior Minister Denisa Sakova announced on social media. He committed suicide while in custody under investigation for alleged corruption.

Lučanský attempted suicide also in mid-December. He injured his eye in the Prešov prison and had to undergo surgery.

The Justice Ministry said at the time that he had not tried to commit suicide. Moreover, General Prosecutor Maroš Žilinka said earlier on December 29 that Lučanský’s injuries had not been caused by another person.

He was transported to hospital on December 29 after suicide attempt. He is in unconscious condition, with some media reports suggesting a brain death.