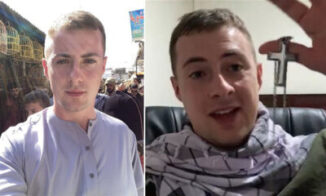 A British student named Miles Routledge who supposedly went on holiday to Afghanistan claims he is now stuck in Kabul as thousands try to flee Taliban authority.

Miles Routledge, a Birmingham student, has been updating his followers on social media since being placed under UN protection following the Taliban takeover.

He is a Loughborough University student who enjoys visiting the “worst locations on the planet,” including Chernobyl two years ago.

When he planned his most recent vacation, which he described as “dirt cheap,” he assumed rebels would not take Kabul anytime soon. Miles responded on Facebook when asked if he’d made it out yet, “no, unfortunately not, it’ll be a few days or weeks maybe”.

Then, in a morning post that has since been deleted, he said, “I’ll be given body armor, emergency evacuation [right now] to a better place as most compounds are to be abandoned.”

He continued, “I’m with the best of the best.”

Miles Routledge (Lawrence of Afghanistan) is still in Kabul.

Let's hope he makes it back to the UK alive. pic.twitter.com/lgSgqvbNWr

Miles, a physics student, has stated that he feels “comfortable” in comparison to the average Afghan. He added, “My tour guide is currently fearing for his family and his only crime is going the extra mile and saving my life, I can never repay him and that saddens me.”

In the midst of the tensions, Miles claims to have seen dead bodies while seeking refuge over the weekend, with the Taliban immediately seizing control following the evacuation of US troops. As the student’s condition deteriorated, he claimed he was compelled to disguise himself in a burqa and run to Kabul International Airport in quest of assistance.

He claimed he was approached by rebels who asked him where he was from near the airport.

He claimed he told them he was from Wales rather than British in the hopes that they would not realize he was from the United Kingdom and would let him go. On Sunday night, Miles hosted a Twitch Livestream in which he answered questions from his fans.

He appeared to have only been in the nation for about a week. Some have questioned the veracity of Miles’ statements, but he has presented travel paperwork and images to back up his assertions.

He began arranging the trip around May, according to his Facebook posts earlier this year.

Miles told the Spectator that he hoped the British government would help him depart or that he should keep his head down and take his scheduled flight out next week. He aims to avoid the third option, which is to “stay permanently in a grave.”

Defence Secretary Ben Wallace has stated that the government is doing everything possible to safely evacuate all British nationals, but that “some people will not be able to return.” The minister confessed it was a “surprise” how swiftly Kabul fell to the Taliban this morning.

On BBC Radio 4’s Today Programme, he said, “I think what was the surprise was the speed at which we find ourselves with the Taliban in Kabul.”