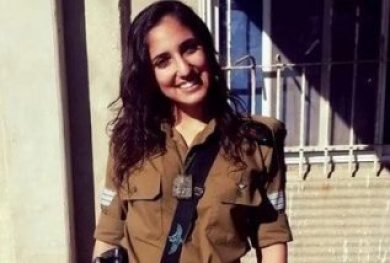 Naama Issachar is a 25-year-old Israeli-American woman, who jailed in Russia since last April after police found 9.2 grams of cannabis in her checked baggage.

Issachar was born in the United States and moved to Israel when she was 16 years old. She holds dual U.S.-Israel citizenship.

She was a “Lone Soldier,” a foreign Jewish man or woman who volunteers to serve in the IDF. Lone Soldiers account for approximately two percent of the Israeli military and are highly admired.

After her army discharge, Issachar left Israel on January 9 for a three-month backpacking trip through India.

For many Israelis, backpacking through India, South East Asia, and South America is a rite of passage after concluding their military service, allowing them to relax and have fun before heading off to school or finding a job.

After three years of being ordered around all the time, you just want a break and rest a little bit before going back to work.

It’s kind of an expression of freedom when you backpack,” former IDF soldier Dan Nahum told Forbes. “You’re as free as you can ever be.”

She was initially charged with possession, a relatively minor offense, but a month later, the charge was elevated to smuggling narcotics. Issachar denies possessing or smuggling any drugs.

Her family emphasized that during her four-hour layover in Moscow, she had no access to the marijuana officials found in her bag, and wasn’t planning on staying in Russia.

Issachar’s cousin, Meital Lazar, told Ynet the worst-case scenario for Issachar is a 3-10 year sentence. “She’s being treated like she’s one of the biggest criminals in Russia.”

Issachar’s Sister Said the Family Has Had To “Jump through Hoops & Fire” to Communicate with Her in Prison.

Since April, Gold said her family has had to “jump through hoops and fire” to gain permission to visit or speak with her sister.

She went on to say that their mother has only been allowed to see Issachar four times and speak with her on the phone twice in four-and-a-half months, far less than the two visits per month and one phone call per week granted to Russian prisoners.

At the August 20 hearing, the judge ordered that Issachar be held in a Moscow police station until her September 3 court date and cannot have any phone calls or visits from family.

Israel Hayom reported that representatives from the U.S. Embassy have met with her four times and a Moscow rabbi has been able to pass letters to Issachar from family members.

Issachar’s trial has been postponed six times and she’s been transferred to three different detention centers or prisons since her arrest, Lazar said, adding that she is currently being held with local drug dealers who ask bizarre questions such as the cost of marijuana or cocaine in Israel.

A WeWantNaama Facebook page was created on August 16 to garner support for Issachar and keep the public updated on the status of her case. The page currently has over 2,000 members who are commenting and sharing information.

A WeWantNaama Instagram page is also providing updates. The pages include appeals to the United States and Israel to take action and warns about flying through Russia. Both are asking followers to use the hashtags #FreeNaama and #WeWantNaama.