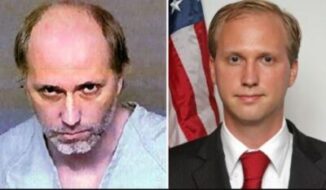 Nathan Daniel Larson is a man from Virginia who is facing multiple charges in two states after he was discovered with a 12-year-old girl whom he traveled across the country to kidnap.

The authorities describe him as a “White supremacist” and “an advocate for pedophilia” is facing charges in California and Colorado for traveling across the country to kidnap a 12-year-old girl.

Larson is in Denver County Jail on a misdemeanor charge and faces felony charges in California for the kidnapping that authorities say utilized such “sophisticated” grooming methods that they fear there may be more victims.

According to Mims, on Monday, police in Fresno received a report of the missing girl. Authorities quickly learned that she may have been traveling with an older man she had met on the Internet in October.

After the pair intercepted in Denver, authorities learned that Larson traveled to Fresno from Virginia, and “persuaded her to sneak out of her house around 2 a.m.,” Mims said.

The sheriff also said Larson “made her wear a long hair wig to alter her appearance. He also told her to act as though she was disabled and unable to speak to ensure she would not converse with anyone at the airport while making their way onto the airplane.”

This is not the first time Larson has faced serious criminal charges. In 2009, he served 14 months in federal prison for sending “a detailed email to the U.S. Secret Service threatening to kill the President of the United States,” the Fresno Sheriff’s Office said. Larson sent the email in December 2008, when George Bush was the outgoing president and Barack Obama was the president-elect.

Years after his prison sentence, Larson ran for the Virginia House of Delegates as an independent in 2017 and lost, according to the Fresno County Sheriff’s Office.
In 2018, the Washington Post reported on Larson’s support for “abolishing age restrictions for marriage and laws against marital rape,” legalizing incest, and his views on White supremacy “as a ‘system that works’” and that “Hitler was a ‘good thing for Germany.’”

Larson who once ran as an independent for Congress in Virginia is in custody in Denver, where he is facing a misdemeanor charge of harboring a minor, Sheriff Margaret Mims of Fresno County, Calif., said during a news conference Saturday morning.

He intercepted by law enforcement officers during a layover on a cross-country flight to D.C., Mims said. He is to appear before a judge in Denver on Thursday when an extradition request is expected to be filed to return him to California. There, he faces felony charges of kidnapping, child abduction, soliciting child pornography from a minor, and meeting a child for the intention of sex.