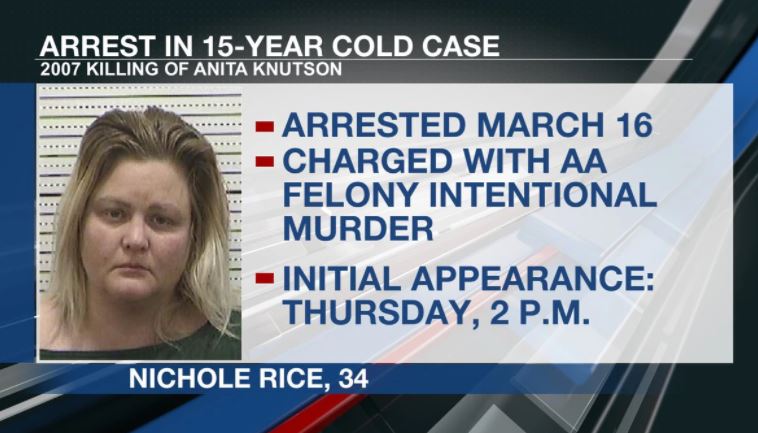 Nichole Rice, born Nichole Erin Thomas was charged with murder, a class AA felony in North Dakota. According to North Dakota state law, the charge carries a potential sentence of life in prison without parole if she is convicted. Rice is being held at the Ward County Jail without bond. She was scheduled to make her first court appearance on March 17, 2022.

Law enforcement authorities in North Dakota on Wednesday announced an arrest in the 15-year-old cold case murder of Anita Knutson, a college student who was stabbed to death in her off-campus apartment. Nichole Rice, 34, Knutson’s roommate at the time of her death, was taken into custody on Wednesday and charged with one count of murder.

Officers with the Minot Police Department at approximately 3:25 p.m. detained Rice at Minot Air Force Base where where she works in a civilian capacity, Minot Police Chief John Klug said during a press conference. She was booked at the Ward County Jail where she is currently being held without bond.

According to Klug, investigators had long suspected that Rice may be the killer, but they lacked sufficient evidence to make an arrest.

“I wouldn’t say that [Rice] was ever cleared,” Klug told reporters. “There was never enough to arrest her, but I would say that she was always a person of interest in this case.”

Asked what the “turning point” in the case was, Klug did not identify a particular piece of evidence. Rather, he said it was investigators piecing together 15 years of information.

“I think the turning point in this case was really just trying to pull all of that information together and put it in an order that made sense,” Klug responded. “A lot of the information is information that we had, it just took a little bit of refocusing and a lot of paying attention to the fine details. And again, it was being able to sit and dedicate some time our officers to that and let them do their work. Like I said, there have been times that we have looked at this case and we wanted to move it forward.”