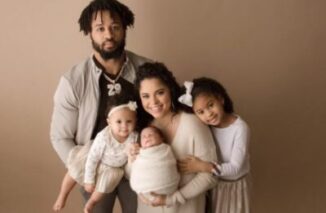 Nina Heisser Thomas is the wife of NFL star Earl Thomas. He was caught cheating by his wife, Nina Heisser, and things took a dramatic turn. Thomas was found naked in bed with several women on April 13 when he was confronted by his wife at the Airbnb that he had booked.

Nina Heisser Thomas and her husband celebrated their wedding in 2016 at Chateau Cocomar in Houston. They have three children. The two were schoolmates in West Orange-Stark High School where Earl played for the West Orange-Stark Mustangs high school football team.

Nina occasionally post photos of their kids and Earl on Instagram. Her last post with her husband was on December 25th, 2019 and it was captioned, “Love is the greatest gift of all ❤️”

Thomas and Heisser had been high school sweethearts and the two tied a knot in 2016. Thomas made sure his wedding with Heisser had been the one he would remember as she decided to wear a crown and showed off his beautiful wife as she walked by his side.

The two looked extremely happy as Thomas had shared some of the pictures from his wedding. Thomas also made sure he looked like the king that he thought he was. He had posted a picture where he was standing in the center with some of his friends and team members surrounding him. Undoubtedly, his crown was stealing all the attention.

He even shared a video of him walking down the aisle for the wedding and captioned it as, “Young Man making power moves.” Fans were spellbound looking at how extravagant the wedding had been. They were also quick to congratulate the couple on starting a new journey.

NFL star Earl Thomas is lucky to be alive after cops say his wife held a loaded gun less than a foot from his head … after she allegedly caught him cheating with another woman.

The Austin Police Dept. responded to a home in the Austin, Texas area at 3:41 a.m. after getting a call about a disturbance.

Cops drew their weapons and ordered both Nina and Earl to the ground — and they complied without incident. That’s when the investigation began and things got WILD.

Nina claims Earl, left their home earlier in the day after an argument over the NFL player’s drinking. She claims Earl’s brother, Seth Thomas, picked him up.

But, a short time later, she decided to check on his whereabouts by logging into his Snapchat account — and that’s when she says she found a video of Earl with another woman.

Nina says she used Earl’s Snapchat account to track his location to a nearby Airbnb rental home … and says she called up two other women to help her confront Earl at the pad. Nina also claims she grabbed Earl’s pistol, a 9mm Berreta, in the process with the intention to “scare him.” When the women arrived at the house, they “discovered Earl and Seth naked in bed with other women.”

In an interview with Earl’s alleged mistress at the scene, she claimed Nina also threatened her and the other woman in the house — pointing the gun at them and yelling “I got something for all you hoes. After speaking with everyone, cops ultimately arrested Nina and both members of her posse. Nina was booked for burglary of a residence with the intent to commit aggravated assault with a deadly weapon — family violence, and later bonded out.

Court records show Nina was also hit with an emergency protective order … requiring her to stay 200 yards away from Earl and his alleged mistress.