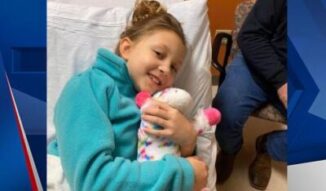 Paisley Elizabeth Grace Cogsdill was a 7-years-old girl, who passed away during a routine tonsillectomy. Her heart reportedly stopped a minute into the medical procedure. Cogsdill’s is from South Carolina. She was a second-grader at Clinton Elementary School.

Paisley Elizabeth Grace Cogsdill died on Friday when her heart stopped and doctors were unable to revive her. She died on Feb. 21 at Self Regional Hospital in Greenwood.

The parents, Austin and Jasmine, said the girl was healthy and had no signs of issues or complications. The family is waiting on autopsy results to help shed a light on how Paisley died, they said.

“Going into surgery, she had no fear,” Mary Beth Truelock, Paisley’s grandmother, recalled to the outlet. “She was smiling and happy. Nothing was wrong, you know? She had no fear.”

“Definitely missing her all the time,” she continued. “You don’t understand why these things happen, but we know it was God’s plan and that’s the only thing that can get us through because we know it was God.”

Cogsdill died Friday at a Greenwood hospital. Paisley’s parents told the television station the girl’s heart stopped one minute into the tonsillectomy.

The girl’s parents, Austin Cogsdill and Jasmine Cogsdill said Paisley, She was healthy and had shown no signs of medical issues.

“You don’t understand why these things happen but we know it was God’s plan and that’s the only thing that can get us through, cause we know it was God,” Paisley’s grandmother, Mary Beth Truelock, told the television station.

A GoFundMe campaign has been launched to cover the funeral expenses. More than $28,000 has been raised as of Monday afternoon.