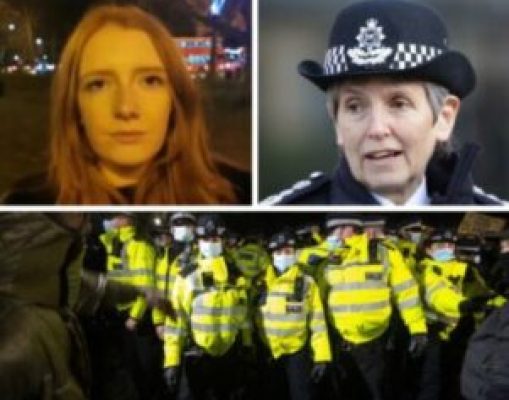 According to Patsy Stevenson Bio, Wiki, and Biography, She is a SOUTHEND woman who was “pinned to the floor” at a vigil at Clapham Common wants talks with bosses at the Metropolitan Police.  Stevenson, whose photo was shared thousands of times on social media and on newspaper front pages, spoke on Sunday to condemn the policing of the vigil the previous day as “disgraceful”.

She is a physics student from Southend in Essex, said she would like to “have a conversation” with the Metropolitan police commissioner, Cressida Dick, adding: “I think dialogue is very important in this case.”

On Sunday she remained unsure why she had been detained when she was “just standing there” and was contemplating whether to challenge the £200 fine she had received. Regardless, she vowed to take to the streets again to fight for women’s voices to be heard, urging others to do the same.

Stevenson said, “I was arrested by police for standing there. I wasn’t doing anything. They threw me to the floor, and I have pictures of me on the floor being arrested, and I’m 5 foot 2, and I weigh nothing, and several police were on my back.”

Stevenson recorded a video in which she said, “After what happened today at #ClaphamCommon, I want to redirect focus away from the police & towards what actually happened. We need to be seen & heard. That’s why I’m calling for everyone to meet at 5 pm on 15 March outside Parliament Square.”

Stevenson said in the video interview that it was a “peaceful protest.” Kate Middleton, the Duchess of Cambridge, came earlier in the day to pay her respects.

Southend Echo described Stevenson as “a former pupil of Cecil Jones Academy and South Essex” and said she wants to have a conversation with Metropolitan Police Commissioner Cressida Dick. She received a £200 fine, according to the news site.

In a statement on Sunday morning, the Met’s assistant commissioner, Helen Ball, said: “We absolutely did not want to be in a position where enforcement action was necessary. But we were placed in this position because of the overriding need to protect people’s safety.”