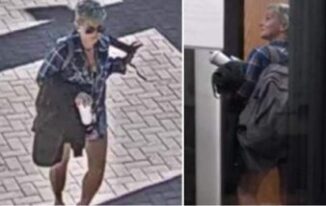 Rebekah Krajacic is a 33 years old woman who made racist comments toward students at the University of Colorado Boulder. She was born in Ohio and a U.S. citizen.

The University of Colorado Boulder Police Department said Rebekah Krajacic made racist comments toward students in an incident captured on video at the Engineering Center on campus. She is not affiliated with the university.

The Rebekah is seen on video cursing at the students, accusing them of stalking her and using racist slurs against them.

The Instagram page that posted the video included this caption with it: “Share. Repost. Tag.” The page contains this identification in its profile: “Black Student Alliance @ CU.”

On October 8, 2019, shortly after putting out a call for information on the woman in the video, police announced that they had identified her.

Krajacic has been on the radar of law enforcement before in Florida. She was accused of careless driving in 2018 in Pinellas County.

In 2017, she was accused of a misdemeanor first-degree after being charged with obstructing or resisting officer without violence, court records in Florida show. You can see a Florida mugshot for Krajacic here.

Tampa police accused her of resisting an officer in 2012, court records show, but the prosecution was terminated.

The suspect was accused in Pinellas County civil court of being a delinquent tenant. Domestic violence injunctions were sought against her in Florida by two different people.

In a statement, the chancellor wrote that, on Sunday, October 6, 2019, “an act of racism occurred at our Engineering Center.

This incident, in which bigoted language was directed at our students, was absolutely unacceptable. I cannot state this strongly enough—racist behavior is offensive to our campus values and will not be tolerated.

The CU Police Department is investigating and searching for the person who committed this racist act, who will be held accountable to the fullest extent possible. While we don’t believe she is affiliated with our campus, her actions are just as insulting to our values.

CUPD has identified the suspect in a racist video that was posted on Sunday. Thanks to community tips & body-worn camera video from prior interactions with her, CUPD has identified her as 33-year-old Rebekah Krajacic, who is not affiliated with the campus. https://t.co/MfYy3fXaJe pic.twitter.com/wUmMrtg1ID