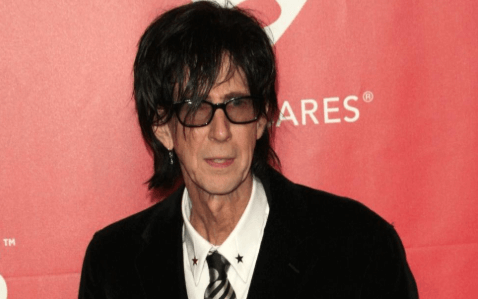 Ric Ocasek was the lead singer of the iconic new wave band The Cars. Ocasek is a member of the Rock and Roll Hall of Fame, to which he was inducted in 2018.

His father worked for NASA. He was raised partly in Cleveland. He said during his Hall of Fame acceptance speech that he went to high school in Cleveland.

The first time I ever played in front of people, I tried to find a place where no one would really know me, he said, of his time in Cleveland.

According to Rolling Stone, Ocasek’s grandmother gave him a guitar when he was about ten because he was enraptured by the Crickets’ ‘That’ll Be the Day,’ but he stopped playing it after taking lessons for three months.

In his Hall of Fame acceptance speech, he thanked his wheel-chaired grandmother for forcing him to sing at age 5 and for buying him the guitar from Sears and Roebuck.

In the same speech, he said that, when the band first started, he was supposed to be the good-looking guy in the band but then he got demoted to the songwriter, so I went with that one It’s hard not to notice that (The Cars’) Benjamin Orr is not here. He would have been elated to be here on this stage. It feels quite strange to be up here without him.

We miss him and love him dearly.

He was famously married to the model Paulina Porizkova. However, the couple separated in 2018 after nearly three decades of marriage.

Paulina is a Swedish- American model. actress and author. She became the first woman from Central Europe to be on the cover of the Sports Illustrated swimsuit issue in 1984 at the age of 18 and the second woman to be featured on the swimsuit issue’s front cover consecutive times (1984 and 1985).

At the time, Ocasek’s wife wrote on Instagram, “Our family always has been — and still is — a well-built car. When the four of us are together, we can go wherever the road takes us. But as a bicycle, my husband and I no longer pedal in unison.

So we’re ditching the bicycle.” She added: “Ric and I have been peacefully separated for the past year. The photos of our happy family are, in fact, happy family photos; we are just no longer a couple.”

Ric has two sons each from his other two marriages also, reaching a grand total of six children. His other sons are Christopher Otcasek, Adam Otcasek, Eron Otcasek and Derek Otcasek.

Ric’s second wife was named Suzanne Otcasek, and according to Newsday, they were married for 17 years. She’s currently an executive assistant at a center that helps children toward healthy development. She has a BA in English Literature from Simmons College.

The Rock and Roll Hall of Fame called The Cars, which was founded in Boston in 1976 by Ocasek and Benjamin Orr, the ultimate New Wave dream machine: a hook-savvy super-charged quintet that fused 60s pop, 70s glam, and Avant-rock minimalism into a decade of dashboard-radio nirvana.

They scored 13 Top 40 singles in what the Hall of Fame calls six classic studio albums. The band moved the punk rock genre more to the mainstream, according to the site.

The site describes Ocasek and Orr as a natural yin-yang.

According to the Rock and Roll Hall of Fame, some of The Cars’ hits were Good Times Roll, My Best Friend’s Girl and Just What I Needed.

Heartbeat City was the Cars’ commercial apex, the site reports, including the song Drive. The band was aided by the MTV generation, according to All Music.