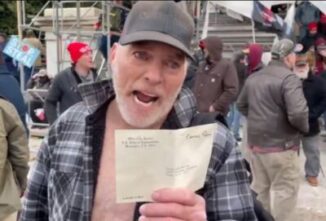 According to Richard Barnett wiki, Bio and Biograph, He was identified as a Gravette, Arkansas man after he was photographed seated at a desk in Pelosi’s office.

Barnett, who is 60 and goes by the nickname “Bigo,” identified himself as the intruder in Pelosi’s office to New York Times reporter Matthew Rosenberg later on Wednesday, according to a post on Twitter by Rosenberg.

A spokesperson Federal Bureau of Investigation confirmed The man pictured in House Speaker Nancy Pelosi’s office during Wednesday’s riots in Washington D.C. turned himself into authorities in Arkansas.

He is a supporter of US President Donald Trump sits inside the office of Speaker of the House Nancy Pelosi as he protests inside the US Capitol in Washington, DC, January 6, 2021. Demonstrators breached security and entered the Capitol as Congress debated the 2020 presidential election Electoral Vote Certification.

He was taken into custody Friday, Jan. 8, 2021, and is being held in the county jail after he was charged by federal prosecutors with three counts for storming the U.S. Capitol on Wednesday in Washington.

Barnett also confirmed his involvement to the Arkansas television station 5News. Barnett, photographed outside the Capitol holding an envelope he said he removed from the California Democrat’s office, said he had taken the envelope because he had bled on it. “I put a quarter on the desk because I’m not a thief,” he told 5News.

Calls on Wednesday evening to a cellphone number registered to Barnett were routed to a voice-mail account that was not accepting messages.

Barnett is a Trump supporter and gun rights advocate who has repeatedly shared false claims via social media that the election was stolen, according to a review of two Facebook accounts tied to Barnett. In one post, Barnett falsely asserted that there were “mountains of evidence” of voter fraud.

One of the Facebook accounts in Barnett’s name was locked or removed from the social media site Wednesday evening. Another account, named “George Reincarnated Patton” after the World War II general, was locked or removed Thursday morning. The Washington Post was able to link the latter account to Barnett because the profile picture depicted Barnett, and the page contained a selfie of Barnett as well as a post he had signed using his real name. In addition, a post on the “Patton” account on Saturday urged his friends to shift to the account in Barnett’s real name. “Tired of double posting,” it said.

In a Dec. 28 Facebook post on the Patton page, Barnett announced he would be attending Wednesday’s rally and urged fellow Arkansans to make sacrifices to join him there. “This is OUR COUNTRY!!!” he wrote. “Can you give one day from the Internet or work or whatever to be active.” He added, “Get the f— up people. Please STAND!!! If not now, when?”

In the post, Barnett expressed disappointment that past political events he attended had attracted only a “small handful” of people. Ten days earlier, he had posted photographs of himself and a few others protesting the election result outside the state Capitol in Little Rock. Barnett posed for one picture holding a rifle.

In a separate post the same day, Barnett wrote that he “came into this world kicking and screaming, covered in someone else’s blood,” adding, “I’m not afraid to go out the same way.” The post was accompanied by a selfie of Barnett with a rifle strapped to his chest. He was wearing a polo shirt bearing on one sleeve a pro-police “Blue Lives Matter” flag logo.

Barnett later shared a link to a speech that Vice President Pence gave on Dec. 22 to a conservative group’s convention in West Palm Beach, Fla., at which Pence pledged “to keep fighting until every illegal vote is thrown out.”