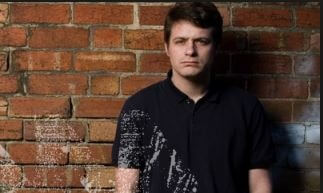 Marsland started his radio career in Adelaide on the SAFM breakfast show with Greg Fleet, Marty Sheargold and James Brayshaw.

He also co-hosted a live, daily morning program AM Adelaide on Channel 7, Adelaide with the multiple-Logie-Award-winning Anne Wills, and then hosted The Late Date Show nationally with Bessie Bardot on 2DayFM, 92.9 and FoxFM.

He contributed to TV shows such as Newstopia with Shaun Micallef, The Glass House, and Rove Live, the latter on which he made several appearances in sketches with Ryan Shelton, including a parody of TV show The Rich List, entitled The Bitch List.

Richard Marsland Suicide
On Friday 5 December 2008, He was meant to have dinner with former colleague Tony Martin and friends at a pub, but he never showed.

About 8:30 pm he phoned his mother Alisson, intent on finding out the family’s plans the following day.

It was a final phone call home hours before Richard drove to Shiprock Falls in Victoria’s Dandenong Ranges, where he was found dead in his car by a park ranger around 10:30 am on Saturday.

In an interview, Mrs. Alisson Marsland and her husband Peter, of Gawler River, South Australia, said their son had suffered depression and attempted suicide about 10 years ago, but few people knew.

Peter Helliar has broken down in tears on The Project as he revealed the heartbreaking story behind his former radio co-host’s suicide.

On July 30th, the 44-year-old was overcome with emotion after his story about Richard Marsland’s death in 2008 went to air. After the segment, Helliar was seen staring down at his desk instead of facing the cameras, with his co-host Waleed Aly asking: ‘You OK, mate?’ ‘Yeah. Um … We need to keep talking about it.

We need to keep listening,’ Helliar replied with his voice shaking.

Peter Helliar has opened up about the death of his friend, pleading with viewers to “keep talking and listening” to loved ones about their mental health.

Helliar, who is usually responsible for The Project’s lighter moments, blinked back tears on Tuesday night as he spoke about Richard Marsland, who took his life in 2008.

In a segment for The Project, Helliar spoke to the late comedian’s parents and friends, all who had no idea of the extent of his mental health struggles.