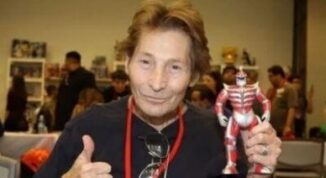 Robert Axelrod was an American actor and also credited as Axel Roberts and Myron Mensah. He has been in several movies and lent his voice to television shows including Digimon, having started vocal acting for the English-language versions of anime in 1980.

Axelrod got his start as a guitarist in the early 1970s before moving into voice work in TV and film. According to his agent, he created more than 150 characters during his career.

He also portrayed a Paul McCartney look-alike on the popular sitcom Family Matters and more recently has appeared in several productions by comedy duo Tim & Eric.

Besides the villain, Lord Zedd and the monster maker Finster in the Mighty Morphin Power Rangers series (and 1995 movie) Axelrod also voiced characters like Armadillomon and Wizardmon in the Digimon anime series.

Other live-action credits include playing a Paul McCartney lookalike on the 90s sitcom Family Matters as well as roles on The Bold and Beautiful and Star Trek Voyager.

Lord Zedd was a major villain from the Mighty Morphin Power Rangers series and recurring through Power Rangers Zeo and Power Rangers in Space. He was played by Edwin Neal, with Robert Axelrod supplying the voice.

Beyond devastated to be informed of the news of Robert Axelrod’s passing. The man’s voice talents is what made characters such as Lord Zedd truly stand out as a villain, as with many of his other VO works.
He did the best he can to fight against his illness; may you rest easy. pic.twitter.com/yoaRoKzx3h

This is @rob27axelrod ‘s agent Kelly from @MobileMonicker. It is with great sadness that I must tell you that Robert passed away yesterday. He was a wonderful soul whose charismatic personality lit up a room. He will be greatly missed. pic.twitter.com/3iDttSnQ0T

Robert enjoyed meeting his fans and inspiring them to follow their passions, his agent said in a statement.

His beautiful and kindred soul will never be forgotten and we take comfort in knowing his memory will live on in all those he inspired, met and knew.