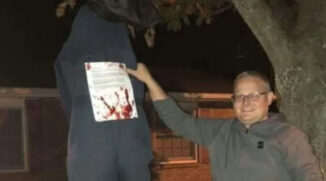 Sam Krzys is a School Resource Officer at Weir High School, who went viral in a photo with his Halloween display that some call a lynching. He is from Weirton, West Virginia.

Krzys was a part of a lawsuit filed against the city of Weirton in 2015, alleging officers were not paid for holidays they worked.

He also participated in a mock DUI crash and trial in April of 2019 to show students the dangers of drinking and driving.

A photo of Sam Krzys shared on Twitter late Saturday night drew quick wrath from others on the social media platform. “Big Boss” shared the picture at about 10:30 p.m. EST on Saturday, November 2, 2019.

The display includes a hooded jumpsuit hanging by a rope from a tree with its feet tied together. Krzys was a new resident of his Weirton neighbourhood when his Halloween decorations drew ire. Neighbours sent him a letter, asking him to remove it, and the message became a new addition to his display. The news was smeared with fake blood and attached to the jumpsuit. He also joked about how the show would “hurt some feelings” and referred to his family as the “crazy Krzys clan.”

The photo of Krzys was first shared by a parent advocate on a private page associated with schools in the tri-county region. The former coworker who spoke with Heavy identified Krzys for the advocate.

The Halloween display went viral late Saturday, November 2, 2019, after a person calling himself “Big Boss” shared the photo on Twitter. Within about two hours, a person at another Twitter handle, West Virginia IWW, identified the man in the picture as Krzys.

Sam Krzys’ neighbours sent him a polite letter asking him to take down the portion of his Halloween display depicting a hanging body.

The letter said, “these elements bring to mind such cruelty and terror that it has caused fears and tears from some of the smaller children on the street – as well as uncomfortable feelings from some of the adults.”

The letter from Krzys’ neighbours prompted him to pose for the photo that would eventually go viral. His fiancee shared a picture of the message on Facebook. In the comments, Krzys shared a photo of himself smiling broadly. The message was splattered with fake blood and tacked onto the back of the dangling dummy.