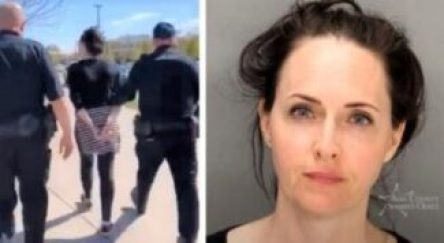 Sarah Brady is the Idaho mother arrested after police said she and others refused to leave a playground that had been closed to the public as part of the state’s efforts to combat the spread of the coronavirus.

Brady was arrested on April 21 for trespassing and violating city orders, according to a news release from the Meridian Police Department. She was booked into the Ada County Jail but posted bond within a couple of hours.

Sarah Brady and other parents gathered at Kleiner Park in Ada County, Idaho on April 21. The playground area had been closed to the public due to coronavirus concerns. According to the Meridian Police Department, the playground had been cordoned off with caution tape and there were signs instructing people not to use the equipment. But police said they observed that the signs and the tape had been taken down. Officers responded to the park after receiving “several calls to Ada County Dispatch,” according to the news release.

Brady’s arrest was recorded on a cellphone and posted to Facebook Live but the full video has since been deleted. KTVB-TV reported that on the original video, the officers were recorded telling Brady and others that they were allowed on the grass and sidewalks but that the playground set was closed. Brady repeatedly asked why they weren’t allowed to be there.

In a shorter clip that has circulated on social media, which is embedded above, an officer was seen asking Brady to leave the playground area as she insisted they were not trespassing. The officer said, “Exit the playground area now. I’m really trying to be nice about this.” Brady eventually turned her back to the officer and said, “Arrest me for being difficult. Do it! Record it!”

KTVB-TV also reported that a Meridian city employee asked Brady whether she had planned the confrontation with the police. “Were you guys organized to do this? So all of you just showed up at once?” Brady did not respond to the question, according to the TV station.

Sarah Brady was arrested around 4 p.m. on April 21. Inmate records show she was booked into jail around 5 p.m. and released two hours later. Records indicate she posted a bond.

The Idaho Freedom Foundation wrote on its website that Brady had been participating in a “playdate protest at Kleiner Park in Meridian.” The organization did not explicitly state whether the protest had been planned by a specific group or whether it was more spontaneous.

The Idaho Freedom Foundation claimed Brady had been charged with a misdemeanor, faced up to six months in jail if convicted, and planned to fight the charge. Heavy is working to confirm whether prosecutors plan to file a formal charge.

Sarah Brady is a well-known figure in the Meridian community. She runs the Facebook group Idahoans for Vaccine Freedom and is associated with Health Freedom Idaho, which is a group that advocates for greater choice over medical decisions, including vaccines.

Brady made headlines in 2017 in a dispute related to her decision not to vaccinate her own children. She enrolled her son at a private kindergarten that year after he was denied entry into a public school.

Brady explained to the Idaho Statesman that she did not want to fill out the exemption form the school required because it asked for information not required by state law. Instead, Brady wrote a statement explaining why she did not vaccinate her child.

Her statement was written on a copy of the Idaho immunization statute. The school district initially insisted Brady fill put the provided exemption form before eventually reversing its decision. Brady asked for a public apology and decided to keep her son at the private school.