Sean Nolte Jr is a submariner in the US Navy, who was assaulted by a Connecticut woman in a pizza shop on the 9/11 anniversary. Footage of the incident, originally posted on TikTok, reportedly shows a woman cursing at a man wearing a naval uniform

Navy officials confirmed to the Hartford Courant that Nolte is a sailor currently training at the Naval Submarine School in Groton.

The confrontation took place on September 11 at Central Pizza in Berlin. Police say the accused assault happened around 9:45 p.m., shortly before closing time at the restaurant.

The video begins with the woman throwing a black hat on the ground as she exclaims, “This is disgusting.” She says “disgusting” again, step forward, and slaps Nolte’s face. She further insults him using profanity. The recording person mostly kept the camera off Nolte, but his face is briefly seen on the right-hand side of the screen as the woman slaps him.

The woman urges the person recording to show the man’s uniform. She then points toward where Nolte was standing and said, “You disgrace the USA.” After more profanity, the woman again tells Nolte and says, “That’s not a uniform.”

Connecticut woman is facing possible charges after being accused of assaulting a Navy sailor in a pizza shop on the 9/11 anniversary. Part of the confrontation was recorded. The video has spread widely on social media and is embedded below.

In the video, the woman is heard accusing the young man of wearing a fake military uniform. Police in Berlin, Connecticut, released the woman’s picture and asked the public for help identifying her. The Berlin Police have confirmed with Heavy that they’ve identified a suspect. She cooperates with investigators, and police say, “when probable cause is developed, we will apply for an arrest warrant.” 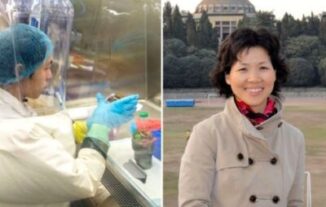