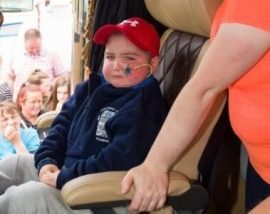 Who is Shane Brophy

Shane Brophy Bio: He was 5 years old brave little boy from Laois, who who was terminally died with cancer.

Shane died just two weeks after the community in Portlaoise rallied to fulfill his dream of riding in a huge American-style truck as part of a massive convoy in the town.

Dozens of local truckers put on a dazzling display with over 50 trucks to fulfill his dream on July 13.

Around 50 trucks and 200 people greeted the five-year-old on the day. The brave boy was collected from his home and brought to Dunne’s Stores in a huge American-style truck accompanied by his mother Elaine Brophy and other family members.

His funeral will take place on Friday.

Shane is survived by his “ma” Elaine, brother Scott and sister Layla.

He will be laid to rest following 2 o’clock mass in St. Abban’s Church, Doonane.