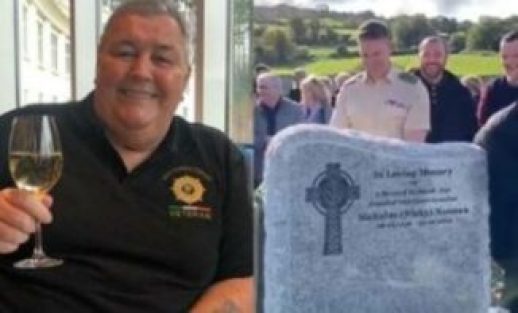 Shay Bradley was a 62 years old Irish veteran, who decides that he wanted to make his family and friends laugh during his funeral. He has died in early October of 2019

Bradley lived his life in Dublin, Ireland. But he loved to cook dishes from all over the world. He was a military veteran. He served in the Irish Defence Forces.

About a year before his passing, Bradley made a recording of himself with the help of his son, Jonathan. He acted as if he was stuck inside the coffin and yelled to be let out.

The audio even includes the sound of him banging on a wooden surface for added effect. In the second half of the recording, Bradley sings, “I called to say goodbye” to his family.

The audio was played from a speaker on the ground during his funeral on October 12, 2019. His granddaughter, Chloe Kiernan, shared a video of the moment, and it has since gone viral on social media with the hashtag #ShaysLastLaugh.

For anyone who hasn’t seen, My grandad was a one of a kind character and has left his legacy for the world to see❤️ #shayslastlaugh pic.twitter.com/POZUZYLHya

He loved to cook dishes from all over the world. His Instagram page was dedicated to sharing pictures and details of his culinary creations.

Bradley wrote in the bio that he was gluten-free and ate a paleo diet.

His last Instagram post, which was shared in November of 2018, depicted “Fresh jumbo prawns sauteed in magic dust and olive oil with freshly chopped garlic and chilies all ingredients combined with fresh pasta all mixed with a half cup of virgin olive oil delicious.”