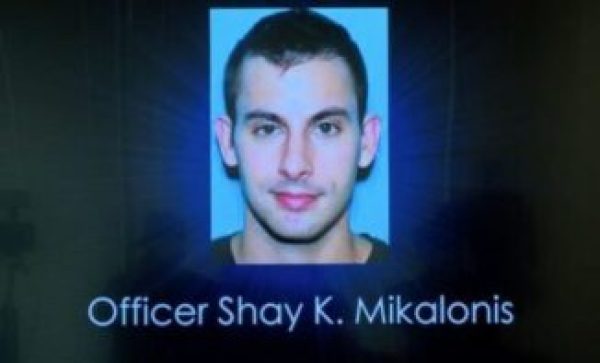 Shay Mikalon is a Metro officer, who shot and critically injured while officers worked to take some protesters into custody.

A demonstrator late Monday night shot Metro officer Shay Mikalonis while officers worked to take some protesters into custody. As of Tuesday evening, Mikalonis is on life support.

Sisolak isn’t responsible for this violent and senseless act, of course. But he underestimated the threat. The Nevada National Guard was waiting Monday night. Sisolak didn’t have them on the streets. Also, Sisolak and local government leaders could — and should — have had Metro clear the crowd hours earlier, which likely would have prevented the shooting.

A note here on the Black Lives Matter protests. There has been a big effort to separate the widespread rioting from the actions of peaceful protesters. Former President Barack Obama claimed, “The overwhelming majority of participants have been peaceful, courageous, responsible and inspiring.”

It’s fine to grant most protesters the benefit of the doubt. It’s understandable that they wouldn’t want their movement tarred by the actions of a minority of participants. They wouldn’t have as much to protest if they extended police officers the same courtesy when thinking about isolated incidents of a cop using excessive force.

Metro says he has worked with the department for four years. This shooting, involving Officer Mikalonis, happened on Las Vegas Boulevard and the Circus Circus Hotel & Casino.

Officer Mikalonis was a part of a group of additional officers who were called to the 2800 block of
South Las Vegas Boulevard to assist with a group of rioters who were throwing rocks and
bottles at officers. As officers were taking a person into custody, a gunshot was fired from across the street striking Officer Mikalonis in the head. He was transported to UMC Trauma where he is on life support.

After the shooting, LVMPD Homicide Detectives responded to the scene and located video surveillance of the suspect who was later identified as 20-year-old Edgar Samaniego.

According to Metro Police, surveillance video shows firing a handgun at the officers as he walked down the street. Detectives tracked Samaniego to a motel located across the street from the shooting.

SWAT officers responded and took Samaniego into custody. Samaniego was transported to the Clark County Detention Center and booked on one count of Attempt Murder on a Police Officer and two counts of Unlawful Discharging of a Firearm.

The other officer-involved shooting, which happened at the Federal Foley Building in downtown Las Vegas, resulted in the death of an armored man, now identified as 25-year-old Jorge Gomez.

Police say Gomez was armed with three Glock pistols. Gomez began walking towards officers when they were asking the crowd to disperse.

Gomez transported to the hospital and pronounced dead.

Las Vegas police tweeted Tuesday afternoon that Homicide Detectives responded to the scene and located surveillance of the suspect, later identified as 20-year-old Edgar Samaniego, firing a handgun at the officers as he walked down the street. According to LVMPD, detectives tracked Samaniego to a motel across the street from the shooting.

Let’s keep Officer Shay Mikalonis in our prayers. His condition remains unchanged after being shot last night. He is still in “grave” condition on life support. 🙏🏾 pic.twitter.com/3ErtqITrlU

SWAT officers responded to the scene and took Samaniego into custody. Police said he was transported to the Clark County Detention Center and booked on one count of attempt murder on a police officer and two counts of unlawful discharging of a firearm.