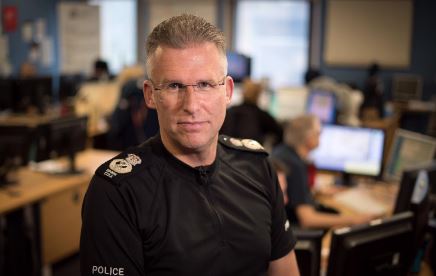 Simon Cole was, a former police chief, was found dead at his home in a suspected suicide yesterday, less than two weeks after retiring.

The force confirmed the matter had been referred to the coroner.

Temporary Chief Constable Rob Nixon said Simon was loved and respected by all the force and that it is ‘hard to put into words how devastating this news is.

He said: ‘Our hearts go out to his family at this difficult time and we will support them as much as we can.’

‘I know Simon had a significant impact on many of the communities of Leicester, Leicestershire, and Rutland, and his death will be a substantial loss to many of the people he worked with.

‘All we can do is pull together and mourn the loss of a greatly respected man.’

Simon Cole, who grew up in Leicestershire, spent 30 years in the force and had been the UK’s longest-serving Chief Constable – taking up his position in June 2010.

During the pandemic, he spoke out about the importance of officers talking about their mental health, saying: ‘If you go out in a police car you first check the tyres, the siren, the oil, the lights, to make sure they all work … people are all part of the toolkit as well and this stuff matters.’

‘He was passionate about delivering for the people of Leicestershire, the area where he grew up, and dedicated his life to policing.’

Rupert Matthews, police and crime commissioner for Leicester, Leicestershire, and Rutland, said: ‘I am shocked and extremely saddened to hear this tragic news.

‘Simon Cole was the epitome of a great Chief Constable whose commitment to public service has been unswerving. We live in a safer place thanks to his leadership.’

Harborough MP Neil O’Brien tweeted: ‘Simon was a dedicated and committed public servant, who made a huge contribution across Leics & Rutland.’

Leicestershire County Council leader Nick Rushton said: ‘We have lost an outstanding public servant whose mission in life was dedicated to making our communities stronger and safer.

‘Our thoughts and prayers are with his police colleagues and with his family at this sad time.’