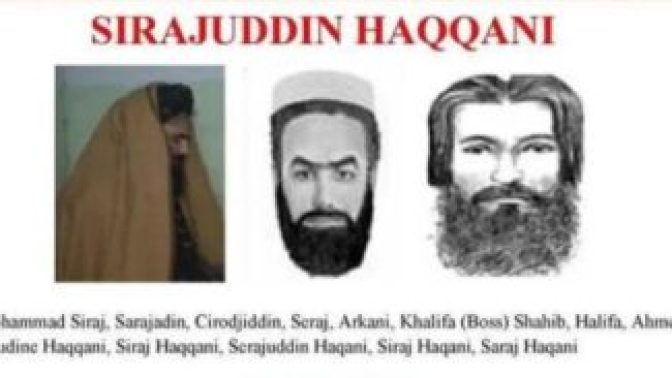 Sirajuddin Haqqani is the deputy leader and wanted terrorists from Afghanistan. Haqqani is also the head of the Taliban’s military strategy and was placed in charge of security in Kabul after the militants seized the city last week.

He was born in 1973 in Afghanistan. He spent his childhood in Miramshah, North Waziristan, and attended Darul Uloom Haqqania in Akora Khattak, Khyber Pakhtunkhwa.

Sirajuddin Haqqani is the son of Jalaluddin Haqqani, a well-known mujahid and military leader of pro-Taliban forces in Afghanistan and Pakistan.

His younger brother Mohammad Haqqani, a network member, died in a drone attack on 18 February 2010. The attack was conducted in Dande Darpa Khel, a village in North Waziristan.

He is a military leader hailing from Afghanistan. As deputy leader of the Taliban, he had previously overseen armed combat against American and coalition forces, reportedly from a base within North Waziristan in Pakistan?

His father, Jalaluddin Haqqani, founded their namesake jihadist group and handed over leadership before his death in 2018 at 71. The father had been paralyzed for a decade by then. But in the 1980s, the elder Haqqani was among the U.S.-backed mujahedeen warlords battling a Soviet Union invasion and was a close friend and mentor of the slain al Qaeda terrorist Usama bin Laden the U.S. Director of National Intelligence’sIntelligence’sIntelligence’sIntelligence’s Counterterrorism Guide.

U.S. officials have blamed the Haqqani network for numerous high-profile attacks in Afghanistan, including the 2011 attack on the Kabul International Hotel and a pair of suicide bombings at the Indian Embassy. The group had also attacked the U.S. embassy in Kabul in 2011 and is blamed for ” the largest truck bomb ever built,” a 61,500-pound device intercepted by Afghan security forces in 2013.

In February 2020, the younger Haqqani wrote an op-ed that appeared in The New York Times, claiming he was ” convinced that the killing and the maiming must stop.” The paper identified him as ” the deputy leader of the Taliban” but left out his position as the head of a terrorist group.