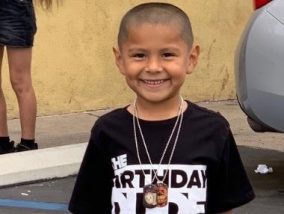 Stephen Romero Bio: He is a 6-year-old boy who was killed in the Gilroy Garlic Festival on Sunday evening July 28th.

Three people were killed and fifteen others injured when a shooter opened fire at the festival The gunman, gained access to the festival by cutting a fence, he was shot and killed by the police.

He was born in 2006. Romero had just turned 6 years when he was killed at the Gilroy Garlic Festival in California.

The boy had recently celebrated his birthday at Legoland, according to NBC Bay Area.

Romero mother and other family members were also injured in today’s shooting, being treated at the same hospital.

Stephen Romero was the first victim to be identified from the Gilroy Garlic Festival shooting.

The boy’s father told local news stations his son was among those killed. The boy was at the festival with his mother and grandmother, who were also injured in the shooting.

The mother was shot in the hand and in the stomach. She is expected to survive together with her grandmother.

As news of the killing of News of his death quickly circulated on social media. People were devastated that a young boy would be among those killed in a mass shooting during a family event. One woman wrote on Twitter: “The 6-year-old, Stephen Romero, who died at #GilroyGarlicFestival today.”

The 6 year old, Stephen Romero, who died at #GilroyGarlicFestival today.

6 year old Steven Romero of San Jose is one of the 3 victims killed in the Gilroy Garlic Festival Shooting. RIP 🙏🏻 @nbcbayarea https://t.co/anfqNSVs3p pic.twitter.com/ioE5fDagj7