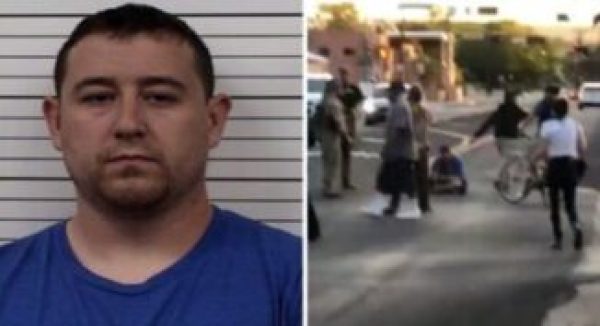 Steven Ray Baca is a former City Council candidate and son of a sheriff. He was identified as the man accused of shooting another man at an Albuquerque, New Mexico, protests over a statue of a Conquistador.

The complaint says cell phone footage shows that Steven Baca Jr. was at the scene “in what appears to be a manner in which to protect the statue from protesters. He was also recorded “interacting with the crowd.

In 2019, the Albuquerque Journal ran a short story on Baca that provides some biographical information. He was one of six candidates for an Albuquerque city council seat at that time.

That story says he is the “son of a former Bernalillo County sheriff.” It also says that Steven Baca was working as “a freelance process server and skip tracer” and was a native of North Valley.

He told the newspaper he was seeking office because he feared the community was becoming a “third world country,” calling local elected officials “complete wimps when it comes to fighting crime.” He also criticized the city’s efforts to combat homelessness.

“You kind of have to handle it from a criminal justice perspective – the crackdown on the low-level crimes that the homeless community is doing; have officers do warrant pickups, the crackdown on those very small crimes like drug abuse. … A lot of the people (who are homeless) are addicted to drugs; you need to get those people into the court system so they can be forced to go to rehab,” he said in that article.

In 2014, a man named Steven Baca of Albuquerque created a Facebook page called “Citizens who stand with APD” while a college student. He told KOAT.com that he created the page to defend the police after protests, saying, “They don’t understand the job that they do, they’re not in that moment making those split-second decisions.” He said in that story that his uncle works for APD.

Albuquerque Police confirmed that a man was shot at the protest in Albuquerque, writing on Twitter, “PD is investigating a shooting that just occurred at Mountain/Rio Grande. The shooting occurred during a protest event. One male subject was shot and has been transported. Officers are securing the scene. The public should avoid the area. This scene remains active and under investigation. We will provide updates when they are available.

The injured man was in critical but stable condition. Some news sites erroneously gave the arrested man’s name as Stephen Baca.

“We are receiving reports about vigilante groups possibly instigating this violence, Albuquerque Police Chief Michael Geier said in a statement. “If this is true will be holding them accountable to the fullest extent of the law, including federal hate group designation and prosecution.

This is the shooter. He said, “My father is the BCSO (Bernalillo County Sheriffs Office).” pic.twitter.com/YRGL3mjljj

One dramatic video shows a scuffle between Baca and other people before gunshots break out.

Members of the guard were trying to protect a statute from the crowd, which was intent on pulling down the statue. Eventually, the armed guard members stepped down from the statue. One video shows that some people began chasing after another man in a blue shirt who had been milling around in the crowd. “Go home,” and “get out of here,” and “instigator,” people shout on the video right before the shooting. One person hit the man with a skateboard. The man in the blue shirt doesn’t appear standing on the statue with the group of militia members, at least not in the videos circulating on social media. Rather, he’s milling around the crowd.

Gunfire then breaks out, but you can’t see the actual shooting in the video. It was not immediately clear whether the man was affiliated with the guard. People appear to be scuffling in the street when the gunshots ring out. “F*ck, he f*cking shot somebody. F*ck. Oh my God,” the narrator of the video says. The woman who posted that video later privatized it. However, other dramatic videos emerged from the scene. You can watch videos from the scene throughout this article.

in video recorded in Tiguex Park in Albuquerque earlier tonight, a member of the right-wing militia New Mexico Civil Guard is shown with his weapon in hand just before four gunshots are heard https://t.co/OKm9Qk3VSu pic.twitter.com/Kklkj8WekU

Members of the NM Civil Guard detained by police. pic.twitter.com/x1K4wRb4W2

I know it's hard to get through the din of social media and the neverending flood of breaking news.