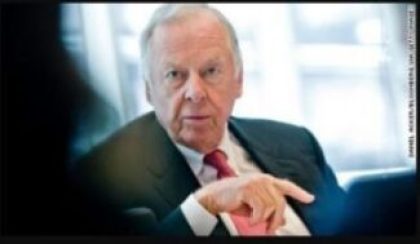 T.Boone Pickens was an American capitalist and oil tycoon and corporate raider who died on September 11 at the age of 91. He had battled back from a series of strokes and further head injuries sustained in a 2017 fall.

Pickens was born in Holdenville, Oklahoma, the son of Grace (née Molonson) and Thomas Boone Pickens. His father worked as an oil and mineral landman (rights leaser).

During World War II, his mother ran the local Office of Price Administration, rationing gasoline and other goods in three counties.

Pickens was the first child born via Caesarean section in the history of Holdenville hospital.

At age 12, Pickens delivered newspapers. He quickly expanded his paper route from 28 papers to 156.

Pickens later cited his boyhood job as an early introduction to “expanding quickly by acquisition”, a business practice he favored later in life.

When the oil boom in Oklahoma ended in the late 1930s, Pickens’ family moved to Amarillo, Texas.

Pickens attended Texas A&M on a basketball scholarship, but he lost the scholarship and transferred to Oklahoma A&M (now Oklahoma State University), where he majored in geology.

He is a member of the Sigma Alpha Epsilon fraternity. He graduated from Oklahoma State with a degree in geology in 1951. Following his graduation, Pickens was employed by Phillips Petroleum. He worked for Phillips until 1954.

In 1956, following his period as a wildcatter, he founded the company that would later become Mesa Petroleum.

At the time of his death, Pickens net worth was reported to be around $500 million.

T. Boone Pickens Death and Cause

He died on September 11 at the age of 91. Pickens is survived by his five children, Deborah Pickens Stovall, Pam Pickens Grace, Michael Pickens, Tom Pickens, and Liz Pickens Cordia, as well as 11 grandchildren.

Pickens’ grandson, T-Boone Pickens IV, died on January 2013 after taking a mixture of heroin and Xanax.