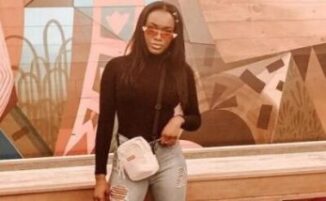 Tahzjuan Hawkins is 25-year-old the cast member for Bachelor in Paradise season 6.

she grew up in Houston but moved to Colorado with her mom, brother, and two dogs. She loves reading, outdoor concerts and shopping with her mom.

She has a tattoo that says ‘I love bad ideas. Hopefully, she will stick around longer than one night as a cast member on Bachelor in Paradise so that fans can get to know her better. Perhaps she can show off her tattoo on the beach in a bathing suit.

During week 3, cast members will be eliminated and new ones will enter the beach in search of love and stir up drama among the already-developing couples.

One of those hopefuls (and potential trouble makers) is Tahzjuan Hawkins.

Hawkins chose to receive her education in Colorado, too.  She graduated from the Metropolitan State University of Denver in 2015 with a Bachelor’s Degree in organizational communication.

She is currently working towards earning her Master’s degree in Business Administration and Management from Colorado State University (her anticipated graduation date is 2020).

When she announced her acceptance into the graduate program on Instagram, she wrote in the caption Pursuing all of my hopes & dreams in 2019 “ugly face crying” because last week I was accepted into CSU’s MBA program with a specialization in Data Analytics for Spring 2019 and I couldn’t be more proud of myself!

She First Appeared on Colton Underwood’s Season of The Bachelor.

Tahzjuan earned her place among the Bachelor Nation alums after competing on season 23 of The Bachelor as one of Coltun Underwood’s contestants.

Fans of the show may not remember her, however, because she was eliminated in the first week.

Her elimination was overshadowed by the night one elimination of Alex Dillon, who famously stepped out of the limo in a sloth suit to meet Underwood. Of her competitor’s entrance, she told the camera I don’t know.

What are you gonna tell your grandchildren? Did I pull up in a sloth costume? You know, you have to, like, think these things through.

Will I be the Tahzjua(O(n)e) for Colton? Tune in tonight to find out! 🌹#thebachelor @bachelorabc

According to her LinkedIn profile,

She has worked for the rideshare app Lyft for the past year and four months.

At the time she competed on The Bachelor, her job title was Business Development Associate; however, it looks like she was promoted in August 2019 to Program Specialist.

Everybody has a chapter they don't read out loud